Istanbul opened a new airport in the fall of 2018. This airport is further from the city center than the old airport, but that doesn’t mean it’s more difficult to reach the city center.  In fact, it’s easier, and more affordable, than ever to take the bus from the new Istanbul airport to Sultanahmet, the historic city center.

Note: Recent reports say the bus stop in Sultanahmet is temporarily closed (likely due to low tourism numbers over the past two years). Confirm current operations with HAVAIST staff when planning your trip! 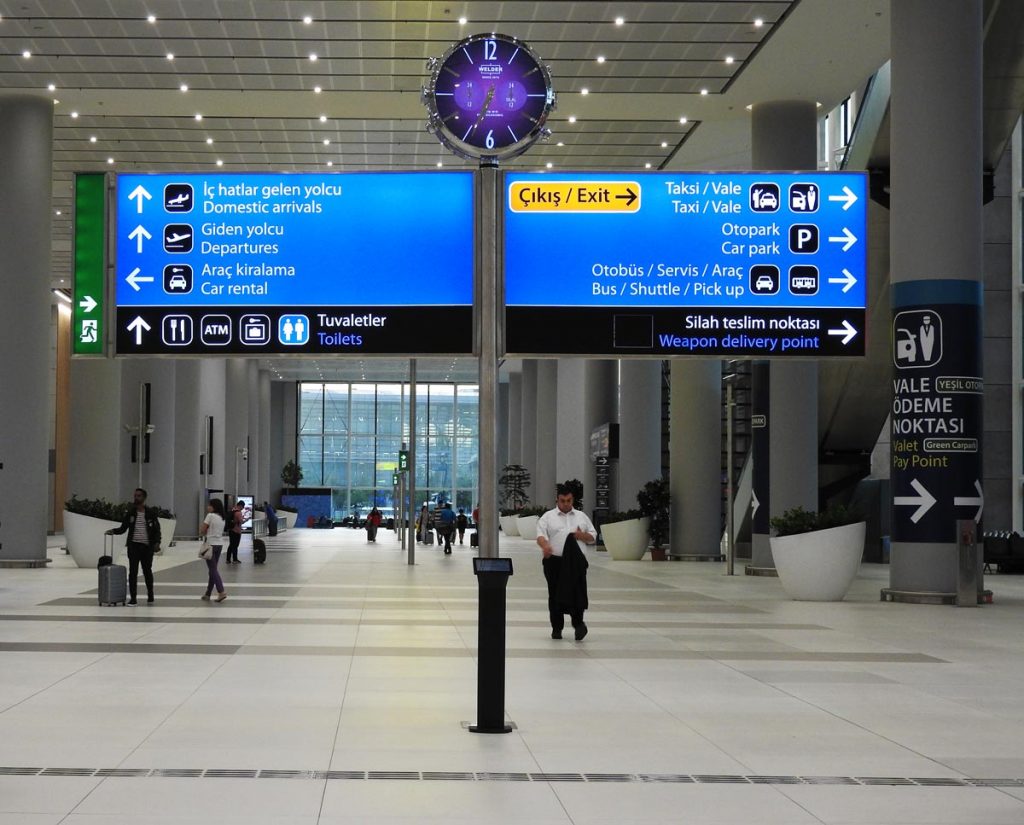 As soon as you clear immigration and customs at the new Istanbul airport, you will enter the spacious Arrivals hall.  Before you get on the bus, you’ll want to grab some Turkish lira from one of the ATMs and pick up a SIM card.  The cheapest SIM card at the airport is the 8GB package from Turkcell, which was 185 lira in August 2019.  (I was shocked by how expensive SIM cards were, especially considering Turkcell also provides mobile service in Ukraine for a tiny fraction of the price!) 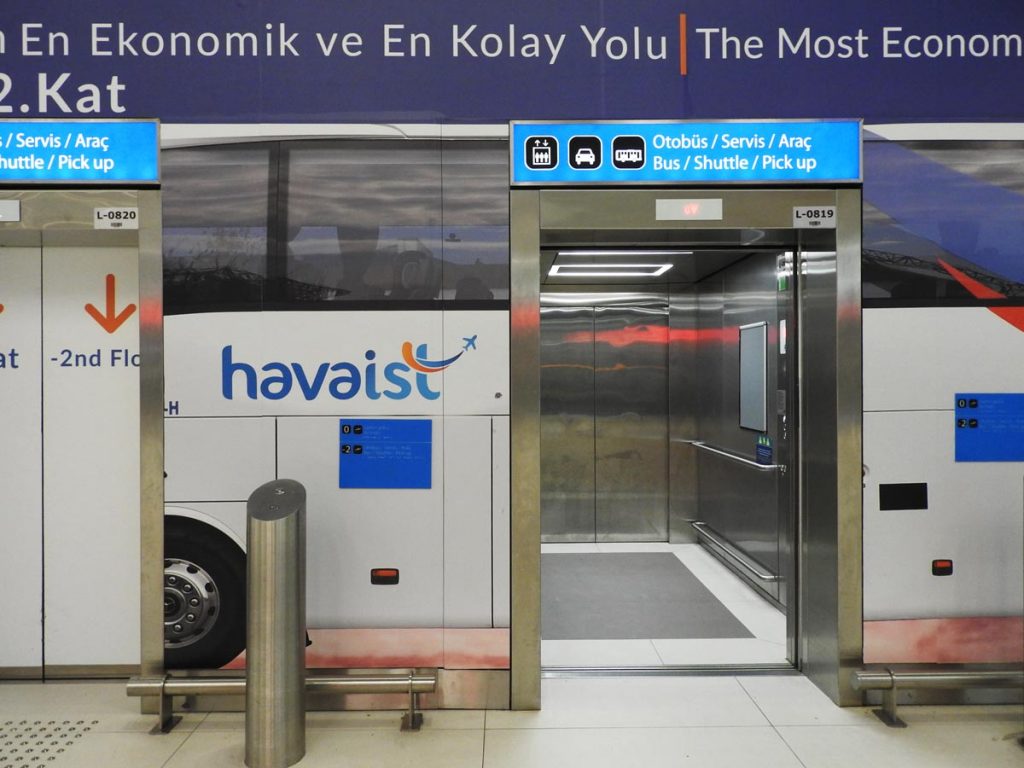 Buses and shuttles from the Istanbul airport to the city depart from the lower level.  There are three elevators that will take you downstairs to the transportation center.  I recommend the middle elevator.

(Joking – I just felt like that needed more text.)

Downstairs, there is signage directing you to the correct departure bay for your bus.  The departure bay numbers do not match up with the door numbers, but each departure bay is clearly marked.  Unfortunately, the bay for the bus from the airport to Sultanahmet is the second-furthest from international arrivals, on the far right at Bay 17 (as of publication time).  You can walk inside or outside to get to the departure bay – there is no difference. 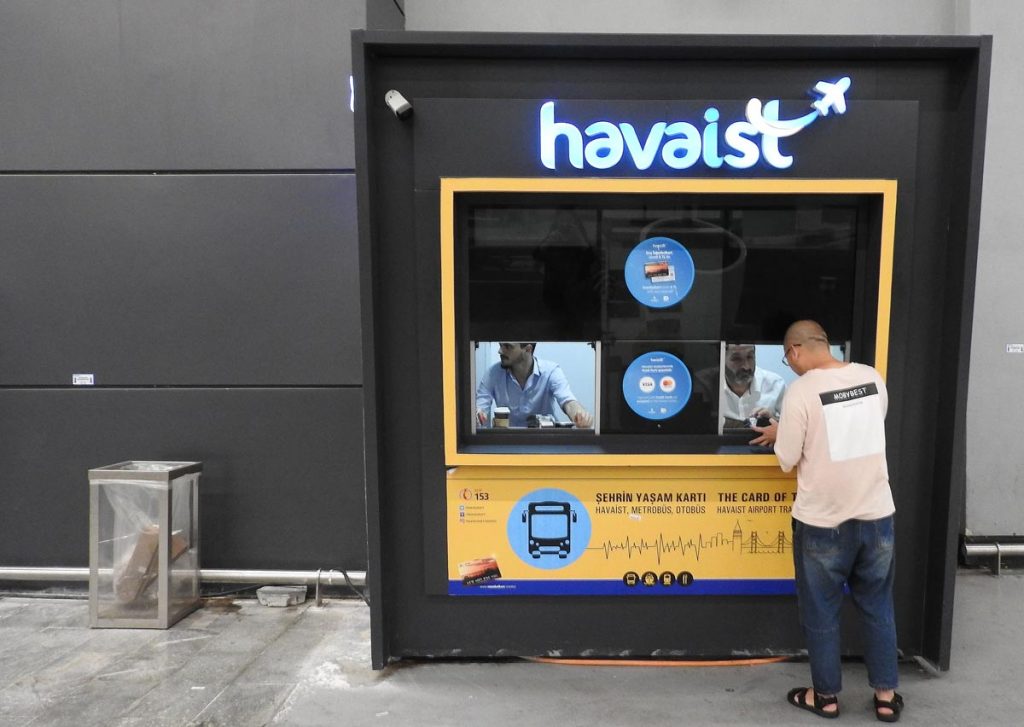 Buses from the new Istanbul airport to Sultanahmet, Eminou, Beyoglu, Taksim and the rest of the city are operated by HAVAIST.  The buses are part of the city’s public transportation network, which means that you need to use an official transportation card like the IstanbulKart to pay for your ride.

I bought my IstanbulKart from the official vendors in the bus departure area.  You must pay at least 10 lira for the card (I hope you went to the ATM upstairs!) and this will include 6 lira for the card, plus 4 lira worth of transportation credit.  You can use your IstanbulKart all over the city, including on buses, trams, ferries and even the funicular, so feel free to load it up with some extra money.  (More on fares below.)

If you’re anti-social, or extremely independent, you can also buy an IstanbulKart from a self-service machine, or you can top up a card you might have kept from an old trip.  I’ve found that some of these machines tend to switch languages mid-transaction, so it might be easier to just go to one of the English-speaking vendors and buy from them.

In August 2019, the rates for the bus from the Istanbul airport to the city were posted above.  From the airport to most of the popular areas (including Sultanahmet, Taksim and Besiktas) the fare was 18 lira (about $3.10 USD or $2.80 EUR at publication time).  Make sure you’ve loaded at least this much onto your IstanbulKart, and consider adding an extra 3 lira if you need to take a bus, tram or subway from the bus stop to your hotel.  Personally, I just popped 50 lira onto my IstanbulKart as I knew that I would use it during my weeklong visit.

The HAVAIST airport buses are comfortable, coach-style buses with luggage storage underneath the vehicle.  You luggage will be tagged before you depart, and you’ll need to provide your receipt in order to claim your luggage at the end of the ride.  I have heard rumors that WiFi service is supposed to be available on the Istanbul airport buses, but I didn’t see any information about this online, and I didn’t check for a WiFi network as I’d purchased a SIM card back at the airport.

The ride from the new Istanbul airport to Sultanahmet by bus took just over one hour. However, I was traveling quite early in the morning and there was very little traffic.  I could definitely see the trip taking longer during rush hour, and if your arrival is very early or very late, you might find it more comfortable to stay in an Istanbul airport hotel rather than try to time your bus trip to match up with your flight.

The Istanbul new airport bus will make a quick stop in Eminou, right at the base of the Galata Bridge, before continuing across the historic center to Sultanahmet.  The airport bus stop in Sultanahmet has a million-dollar location, just a few meters past the German fountain (shown above, in the former Hippodrome) and only a two-minute walk from both the Blue Mosque and the Hagia Sophia.

You should be able to click here to see the location of the bus stop in Google Maps.

You can return to the bus stop here when you want to go back to the airport, as there are departures every thirty minutes, around the clock.  If the bus isn’t there when you first arrive, just wait a few minutes (maybe grab some grilled corn or sesame-seed simit) and watch for the coach with the HAVAIST logo.

If you’re not into buses, there are some other ways to travel from the new Istanbul airport to the city.

Your hotel can probably arrange a private or shared airport shuttle from the new Istanbul airport to your accommodation.  In Sultanahmet, the going rate is usually quoted in euros – about 50 euros for a private shuttle or 20 euros for a shared shuttle (that may make multiple stops at other hotels).

If you make the trip by taxi, expect to pay at least 200 lira (30 euros) to travel between the new airport and Sultanahmet.  You will be responsible for paying any tolls the driver uses along the way, and the meter will keep ticking even when you’re stuck in a traffic jam.  Yikes!

Looking for a Hotel in Sultanahet? 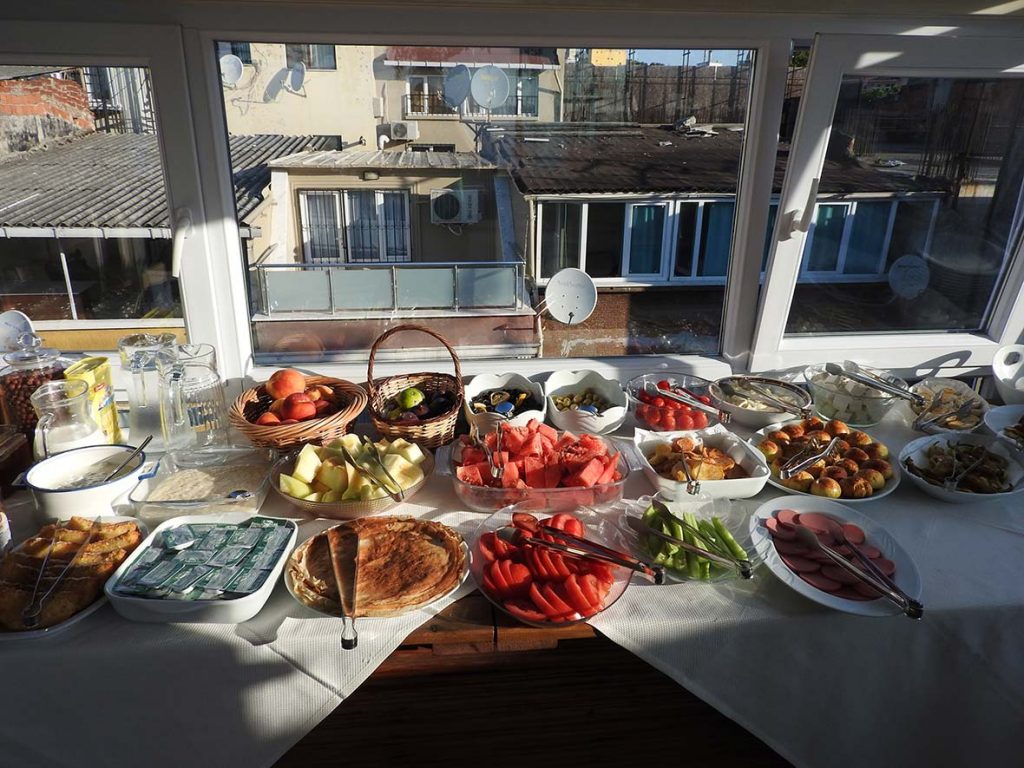 If you haven’t already booked your hotel in Istanbul (or if you have a refundable reservation) I can highly recommend Hotel Buhara Family Inn.  This is a traditional family-run guesthouse with spectacular views of the sea (and even pods of dolphins!) from the breakfast terrace, where every morning you’ll be greeted with a sumptuous buffet of traditional Turkish breakfast foods.  It’s less than ten minutes by foot from the HAVAIST bus stop in Sultanahmet and the nearby tram station, making it easy to access from the airport, and easy to use as a jumping off point for sightseeing around Istanbul.  The price is great for the location, but the hotel books up fast so reserve your room as soon as you know your travel dates.

Have you traveled to Istanbul’s city center on the new airport bus lines?  Let me know about your experience in the comments!

How to Spend a Day in Fener and...

Seven Can’t-Miss Things To Do in Sultanahmet, Istanbul