How to Spend a Day in Fener and Balat, Istanbul 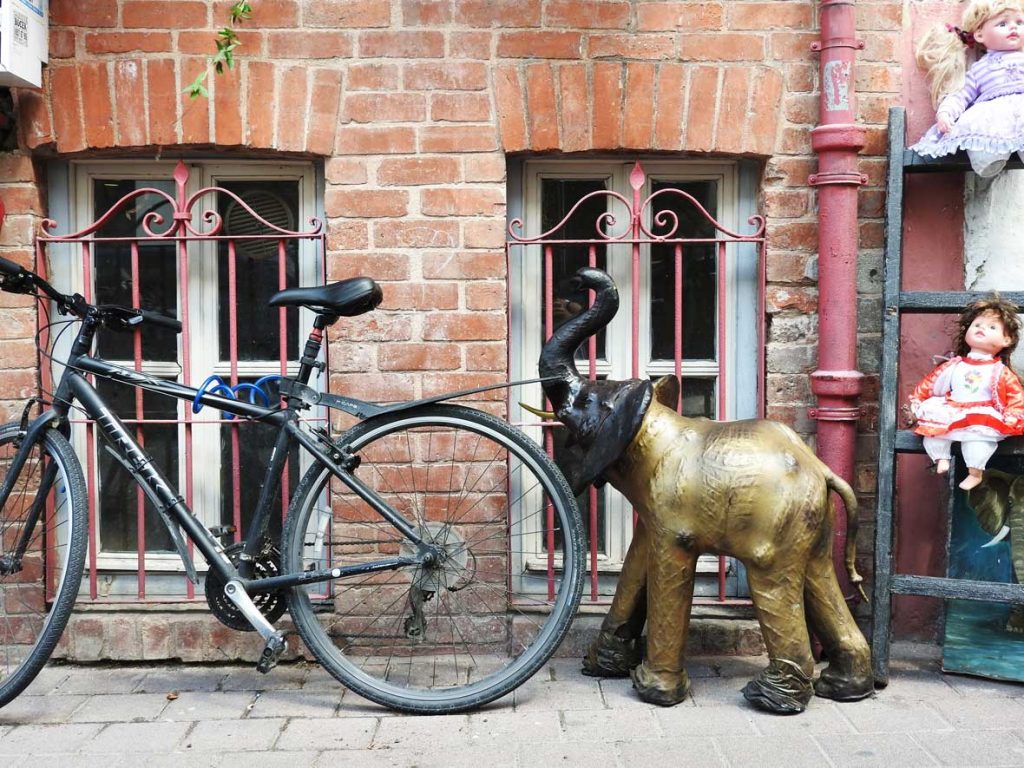 On my most recent trip to Istanbul, Turkey, I did a walking tour focused on hidden architectural gems in Karakoy and Taksim.  One of the other travelers on my tour was interested in knowing more about the city’s Jewish history, and our guide recommended that she spend an afternoon exploring Fener and Balat (which he referred to as simply “Fener Balat”), a colorful neighborhood with a rich, multicultural history and a fast-growing cool factor.  Well, that sounded right up my alley too, so I decided to make the trip to Fener and Balat the following day.

It’s hard to draw an official border between the two small neighborhoods of Fener and Balat, so they are often spoken of as a single unit.  Although the area has been occupied since the Byzantine Empire, Fener and Balat really came into their own when the Ottoman Empire took control of Istanbul and many of the city’s Greek residents built traditional wooden houses in these communities, followed years later by the arrival of many Jews and Muslims from Spain.  Elements of all of the cultures remain today in the form of religious buildings, educational institutions, residences, cuisine and art… of which make Fener and Balat a major draw for travelers looking for something different in Istanbul.

I spent about four hours in Fener and Balat, and would recommend that you plan to stay for at least that long (especially if you want to dine in one of the district’s most popular restaurants).  As I mention in the transportation section below, try to time your visit to avoid rush-hour traffic, perhaps visiting from 10:00 to 15:00, so that you don’t spent an hour (or longer) making the seven-kilometer bus trip from the Galata Bridge.

Things to Do in Fener & Balat

Most people come to Fener and Balat to the see the rows of colorful houses dotted throughout both neighborhoods.  While some of the more famous streets (like the hilly Merdivenli Yokus) can get crowded with Instagrammers and amateur photographers, you can still find colorful side streets with few crowds (like the one I snapped above).  Many of the houses have had their facades refreshed with the support of UNESCO, which recognizes the all of Fatih as an area of cultural significance. 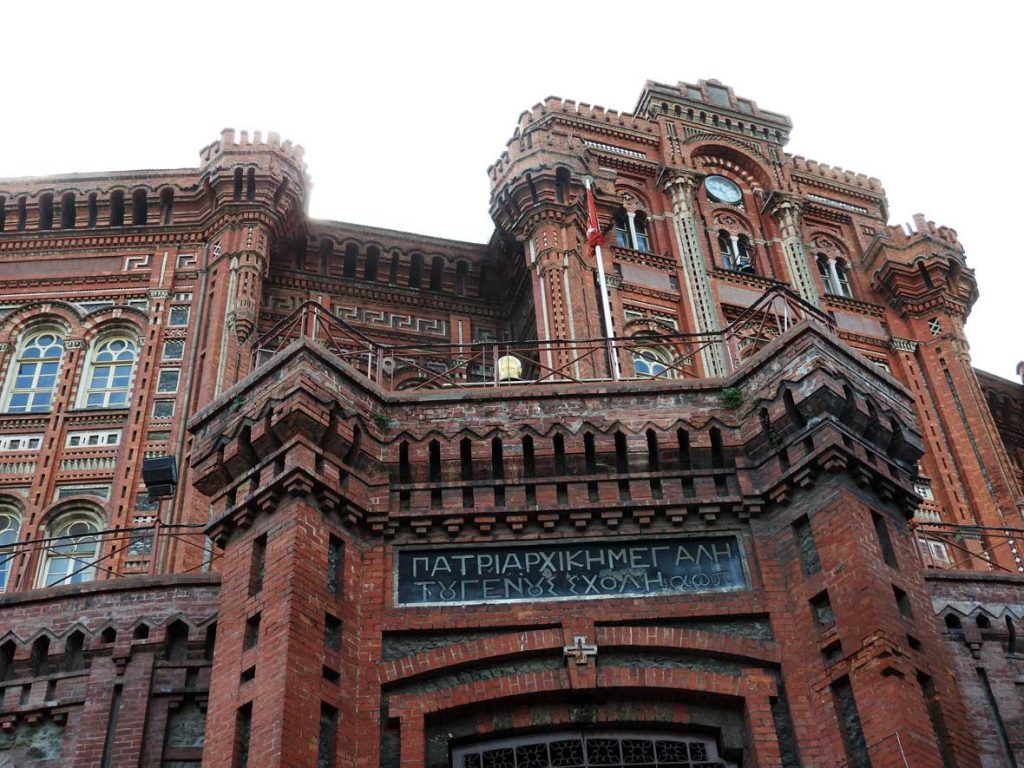 It’s a short walk up a steep hill to Phanar Greek Orthodox College, a monolithic red-brick building that houses Istanbul’s oldest Greek-Orthodox school.  Although a school has been on the site since the 1400s, the building you can see today was built in the 1880s.  Inside, students still study a balanced curriculum that includes the Turkish national curriculum and along with key subjects in Greek as well.

You might also want to check out Kadir Has University, one of Istanbul’s newest universities.  The university’s building was originally an old tobacco factory, and the reconstruction work won an award for architectural beauty from the multinational NGO Europa Nostra. 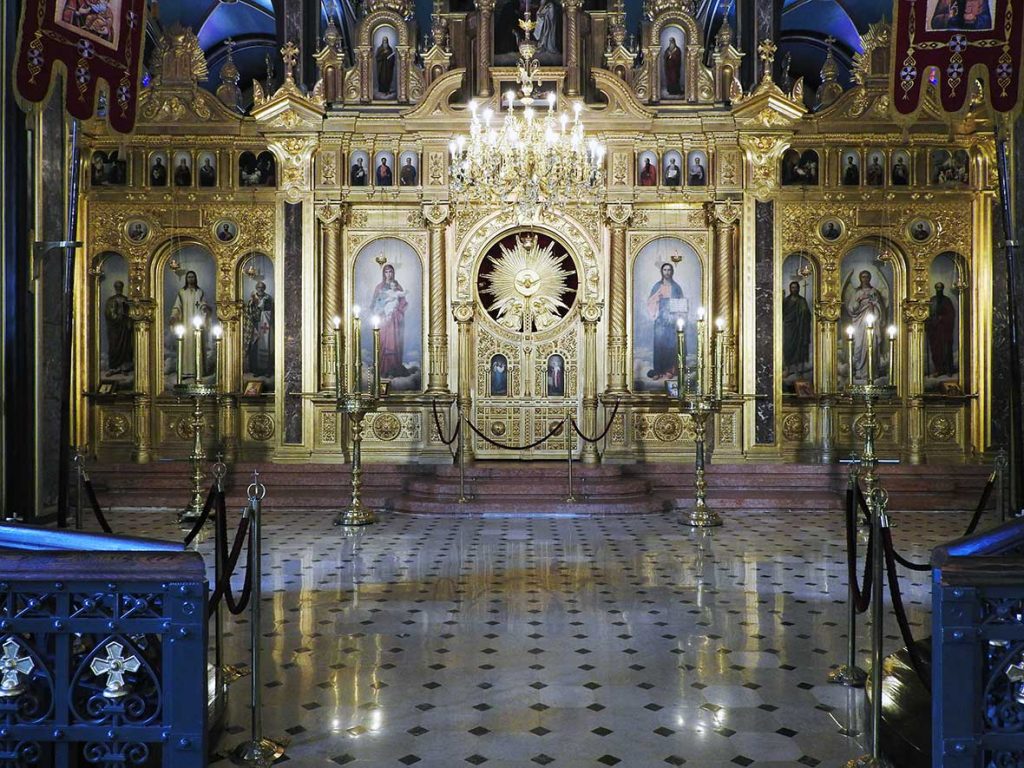 Fener and Balat are both packed with houses of worship spanning centuries and faiths.  I was taken by St. Stephen Bulgarian Church, shown above, with its unique cast-iron facade.  St. Stephen’s underwent a long renovation and reopened in 2018, so visit while it’s still in great condition.

You can also visit the Ahrida Synagogue, but to pass beyond its red gate you will need to arrange entrance in advance, for security purposes.  Similarly, to enter the Gul Mosque, which was built in the eleventh century as the Saint Theodosia Church, you will have to track down the groundskeeper and convince him to let you inside, which I’ve read is not an easy feat.

Although some blogs mention Saint Mary of the Mongols Church, it’s actually located behind a pretty big wall and rarely open to the public.  Don’t go out of your way for this one. 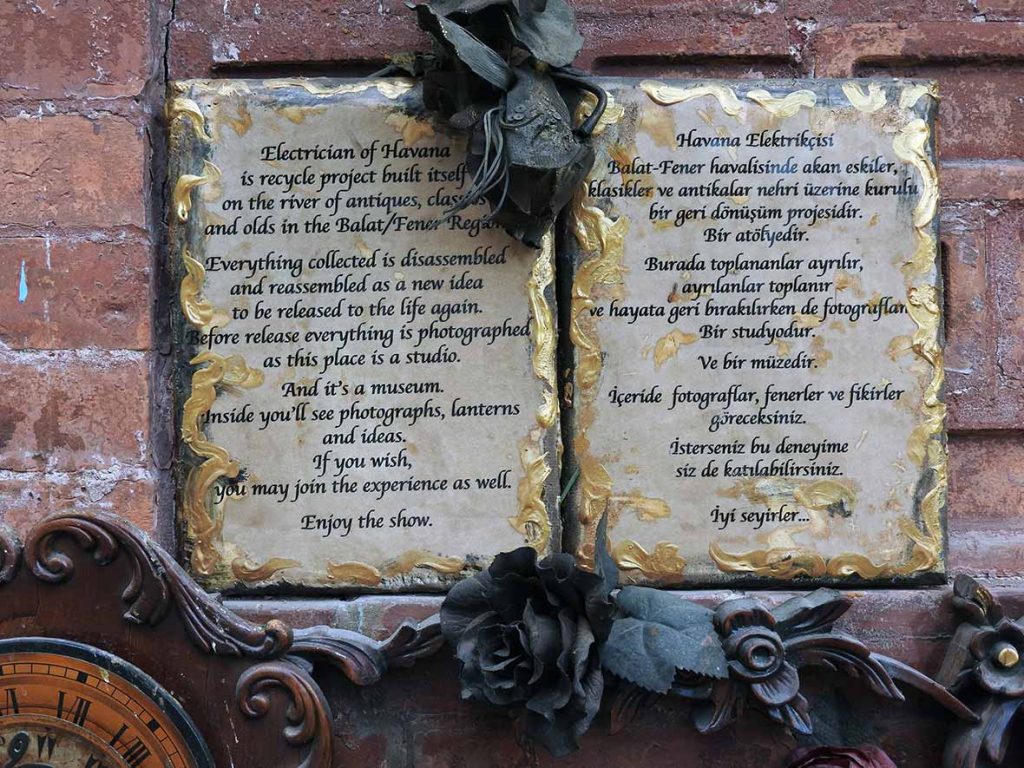 It’s impossible to walk more than two or three blocks in Fener and Balat without encountering the community’s famous antique shops, packed with everything from second-hand trinkets to legitimately valuable antiques.  However, I was more interested in some of the other shops I found, like the Electrician of Havana shop where antique electrical items like lamps and telephones are converted into contemporary art, and Balat Bahce, where they sell more than fifty different kinds of homemade jams, jellies and spreads, mostly featuring local and seasonal ingredients.

Scope Out the Street Art 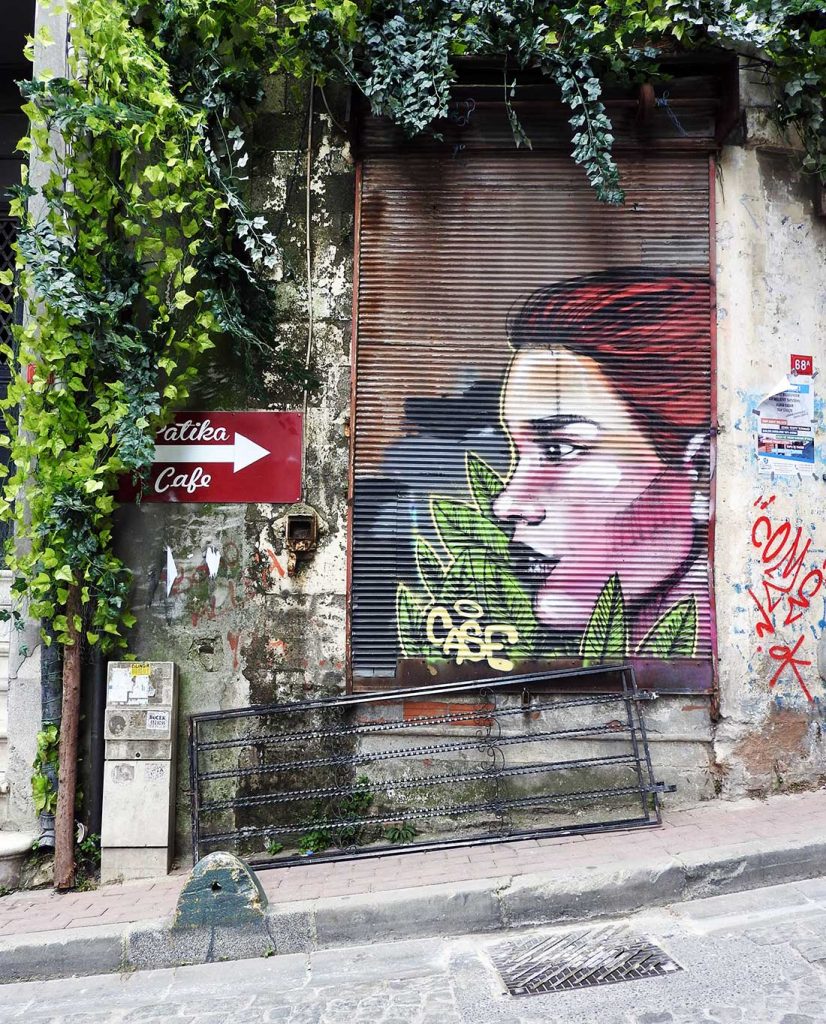 Again, follow the Instagrammers and you will be led to Balat and Fener’s most evocative pieces of street art, including murals of mysterious portraits, perfume bottle grenades, random acts of automobiles and, yes, your standard graffiti.  If you want to see art off the street, pop into The Pill Contemporary Art Gallery, which was closed due to a change of exhibits when I visited, but that regularly features exhibitions of up-and-coming Turkish and international artists.

Where to Eat in Fener & Balat 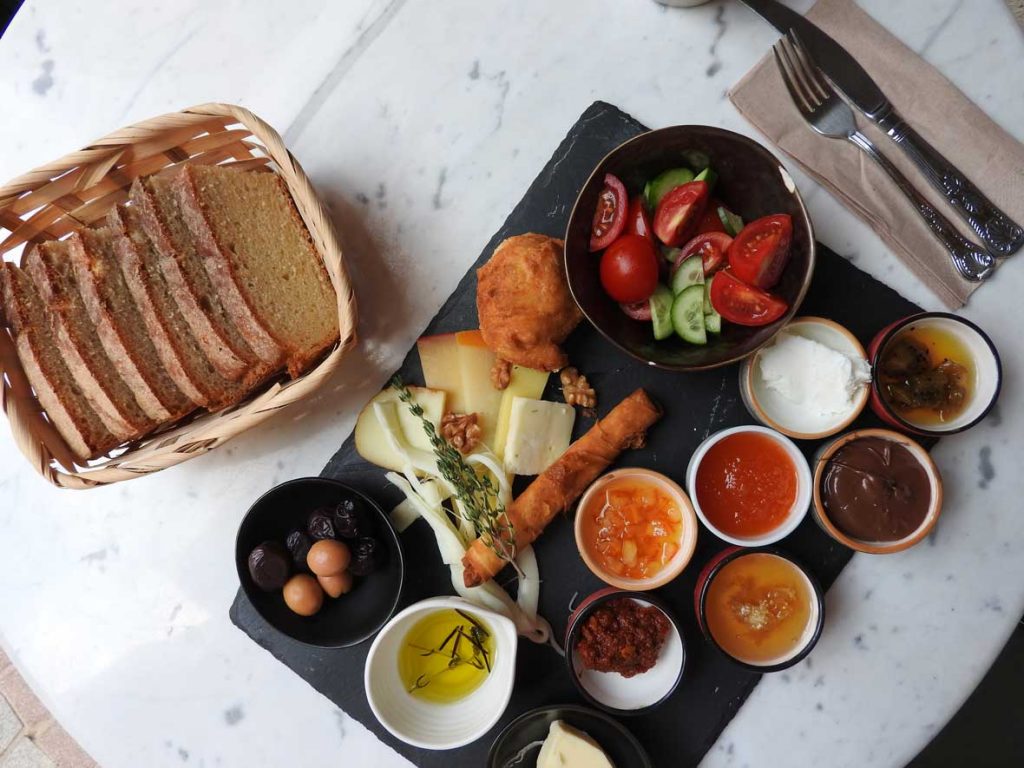 Out of all the restaurants in Fener and Balat, I was most drawn to Cooklife Balat for my brunch in this Istanbul neighborhood.  An adorable corner cafe run by the team behind Cooklife culinary magazine, the focus here is on fresh, local ingredients sourced from the owners’ farm outside Istanbul.  I had their spectacular Turkish breakfast for one, shown above, featuring homemade bread, jams and spreads, salad, olives, cheese, butter, nuts and more.

I also considered eating at Forno Balat because I could see it had an interesting menu of Turkish flatbread pizzas, including some vegetarian options, plus soups, salads and homemade desserts.  If you’re in Fener and Balat on the weekend, Forno also serves a weekend buffet brunch.

This was my backup-backup in case I couldn’t get a seat at either Cooklife or Forno.  With a more traditional vibe, this tiny restaurant focuses on manti, or Turkish dumplings.  They had two different vegetarian options (potato or mushroom) and three meaty options, all of which come with a liberal covering of special yogurt-based sauce and a drizzle of their secret manti sauce.

When I mentioned I’d been in Fener and Balat, one of my readers asked if I’d been to Brew Coffeeworks.  According to them, it has the best coffee in all of Istanbul, so I was disappointed to have missed it.  Stop by when you’re in Fener and Balat, then come back and let me know if it really is the best coffee in all of Istanbul!

How to Get to Fener & Balat 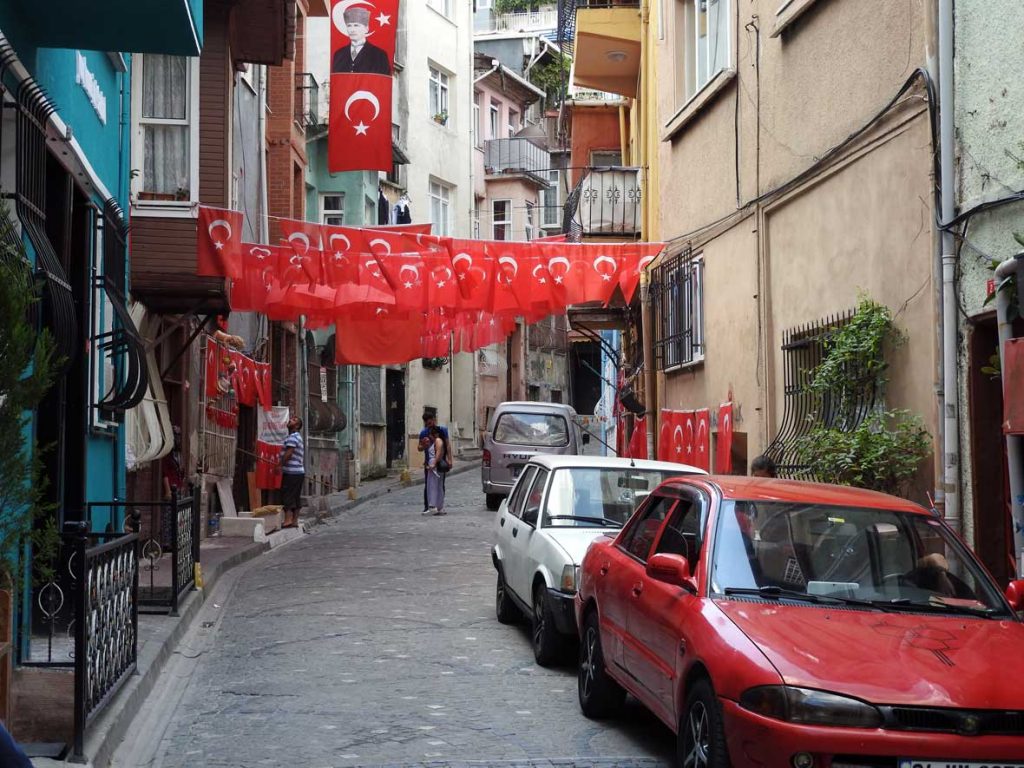 Fener and Balat are located in Fatih, on the European side of Istanbul and northwest of Eminonu.  To get to Fener and Balat from Eminonu, walk to the bus exchange that is labeled “Eminönü (Turyol)” on Google Maps (zoom in and you can see four small lanes of bus stops) and hop on board one of the frequent buses traveling northwest along Abdulezelpasa Cadesi.  If you’re bad at remembering bus numbers, it’s easiest to remember 99, 99A or 99Y, all of which will take you to Fener and Balat.  Traffic moves at a snail’s pace at rush hour, so try to time your visit to avoid the rush of drivers going to, or leaving, work.

I didn’t stay in Fener and Balat and I don’t necessarily recommend that you stay here.  As it’s only accessible by bus, with no subway or tram service, it can be time-consuming to reach other areas of the city from here.  However, if you need to base yourself in Fener and Balat because you’re in the neighborhood for personal reasons, or for work, you could look at Hotel Troya Balat, which is located in a nineteeth-century historical building on the near side of the district, or Balat Residence for a traditional, family-run hotel with self-contained apartment units.

Istanbul is one of my favorite cities on the planet, and I’ve already planted the seeds for a return visit (my third!) next summer, but this time with my mom as my travel companion!  I can’t wait to introduce her to everything from Cooklife Balat’s beautiful brunch to the ancient sights of Sultanahmet.

For more advice about traveling in Istanbul, click through to all my Turkey travel guides.  At present, they’re all about Istanbul, as it’s been years since I traveled down the Turkish coast (another trip worth repeating!).

Not So Fearless – On Having My Phone Stolen in Buenos Aires