Ten miles west of Turin, Italy’s historic center is a little town with a big secret: one of the world’s best contemporary art galleries in a majestic former castle. The little town’s name?  Rivoli, Italy.

I’ve been in love with Rivoli since 2005, when I had an annual pass to all of Turin’s museums.  I made sure to visit the town, and its contemporary art gallery, at least once each season.  The exhibits were always changing, but the town’s quaint and quiet atmosphere always stayed the same.

On my most recent trip to Turin I took a day trip to Rivoli.  I started by exploring the town’s historic center, walked to the contemporary art museum and then stopped for lunch at a Slow Food-inspired pasta restaurant on the town’s main pedestrian street.

My day trip was one of the highlights of my week in Turin, and I would recommend that every visitor to northern Italy add Rivoli, Italy to their itinerary.

The Town of Rivoli, Italy

With fewer than 50,000 residents, Rivoli, Italy still maintains much of its medieval charm.  For tourists, the most interesting part of Rivoli is its historic center (centro historico). 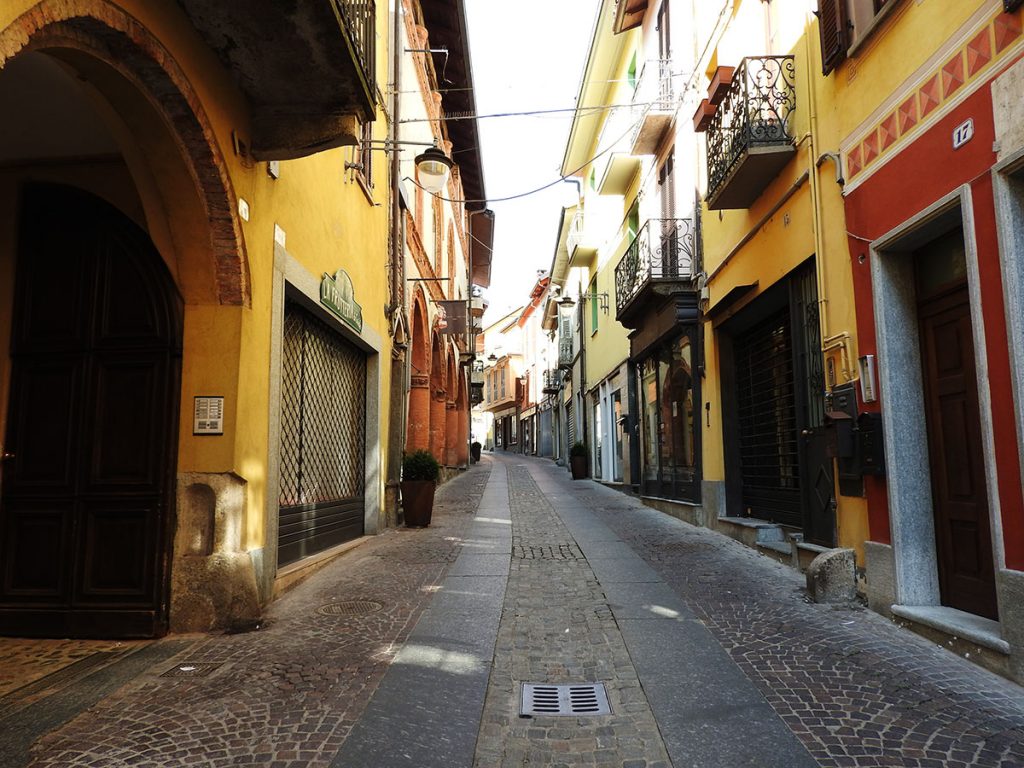 The historic center is a web of narrow cobblestone streets.  Many are fully pedestrianized, while others allow vehicle traffic in one direction only.  The lower streets are filled with locally-owned boutiques and small coffee shops, but as you ascend up the hill towards the town’s magnificent castle you’ll notice the buildings shift to traditional apartment blocks and palazzos.

In many ways, Rivoli feels more like a Tuscan hill town than a northern Italian suburb.  Besides the cobblestone streets there are also stone arches, dramatic murals, ancient clock towers and hanging planters overflowing with flowers.

One of the town’s landmarks is the ancient campanile (bell tower) of the Santa Maria della Stella church.  It is just a few streets away from the Casa del Conte Verde (House of the Green Count), the former house of Amedeo VI of Savoy, which is now known for its arched facade and rotating exhibits about Piemontese folk traditions and ethnography.

Warning: This section contains an image of an animal that may be disturbing to some readers.

The most important tourist attraction in Rivoli, Italy is also my favorite – the Castello di Rivoli Contemporary Art Museum.

Turin is famous for its ring of spectacular Savoy palaces, and Castello di Rivoli is probably the ugliest monstrosity to ever be called a Savoy palace.  That’s not a mistake.  This is one ugly palace.  And to make it worse, it has a dark and depressing history…

Construction on the castle began in the 900s (yeah, like one thousand years ago!) but was never totally finished.  Angry men were angry for the next three hundred years or so, and there was ongoing damage to the castle during this time.  Later, during the Renaissance, Duke Emanuele Filiberto was exiled from Turin to Rivoli for his failure to produce a male heir.  He moved into the castle for several years, gradually improving its condition.  After that, Duke Vittorio Amedeo II was also exiled here after abdicating the throne and then trying – and failing – to regain power of the Savoy dynasty.  After the Savoy dynasty collapsed the castle was taken over by the municipality, who used it as a barracks and library.  Finally, it suffered even more damage during World War 2 before being restored and converted into a contemporary art museum in the mid-1980s.

I told you that was a sad story!

Today, Castello di Rivoli is one of the world’s foremost contemporary art museums.

The museum is divided between the palace’s two main buildings, with the ticket booth and temporary exhibits on one side of the wide courtyard, and the permanent galleries in the opposite building.  Bold metal sculptures hang in the courtyard, creating a thought-provoking atmosphere from your first steps on site.

During my visit there was a temporary exhibit of the works of Georgio di Chirico, one of the most famous Italian surrealists of his time.  Interestingly, the museum’s curators had decided to place his works throughout the permanent exhibits, creating a fascinating juxtaposition and helping me to see some of my old favorites in a new light.  Because of the way the paintings were displayed, the temporary exhibit didn’t add a lot of time to my visit.  I was able to explore the museum just over two hours, though on past visits (where the temporary exhibits were displayed separately) I’ve usually stayed between three and four hours.

My favorite works at Castello di Rivoli are always by Italian artist Maurizio Cattelan.  I first discovered his art when I was a pre-teen, in an old Vogue magazine, and since then I’ve loved his irreverent take on the world we live in today.  Just a few weeks before my trip to Rivoli, Italy, I also saw one of Cattelan’s pieces at the PinchukArtCenter in Kiev.

As someone who works in education, I was stopped in my tracks by Charlie don’t surf, the 1997 installation shown above.  At first, it appears to be nothing more than a boy at his desk, but when you get closer you realize that the boy is attached to his desk by pencils that have been stabbed through his hands.  It’s still on my mind, weeks later.

Perhaps Cattelan’s most famous piece, Novecento, literally hangs in the halls of the Castello di Rivoli.  Also from 1997, this piece features a taxidermied horse, once strong but now hanging from the palace ceiling in a hopeless, dejected position.

Both Charlie don’t surf and Novecento become more provocative in light of their placement within the walls of an opulent (if ugly) Savoy palace.  The floors, ceilings and walls of the palace are almost entirely in their original state, complete with gold chandeliers, marble tiles, grinning cherubs and serious stone busts.

The placement of the museum’s contemporary art within such a traditional setting makes it one of the most unique art collections in the world.

Of course, the museum features the work of many artists.  You can find information about the museum’s collection and vision on the official website.  As well, as you walk through the galleries you will find in-depth signage in English and Italian, explaining both the work on display and the original purpose of the room where it is located.  Thus, what starts as a contemporary art museum also becomes a rich architectural exploration.

There are several dining options right at the Castello di Rivoli.

The museum’s cafeteria serves breakfast, light lunches and an evening aperitivo.  As is the case in most Italian coffee shops, you pay a small premium to enjoy your drink at a table (or you can save money by standing at the bar).  Entrance is up the staircase shown in the photo above.

More interesting, though, is the Michelin-starred Combal.Zero restaurant, located in the castle gardens.  Open for dinner from Tuesday to Sunday, with reservations highly recommended, Combal.Zero pushes the boundaries of contemporary cuisine with dishes like “glazed cod with crispy black spaghetti and foie gras sauce” and “risotto, turnip, sea urchin compote and bergamot”.  A three-course meal is likely to cost about €125 to €150 without wine, while the tasting menu was recently priced at €105 or €185 (according to Michelin, as the Combal.Zero website is undergoing its seasonal website change as I write this).

Of course, not everyone has €200 to spend on dinner!

For day trippers with a more modest budget, I can highly recommend La Piola di Via Piol, a charming pasta-centric restaurant serving local, seasonal cuisine at reasonable prices.  The interior is described as “modern and refined” and the menu is curated almost as well as the exhibits in the castle – you’ll find a small selection of fresh, homemade dishes made from high-quality ingredients that are actually in season.

I arrived at the restaurant less than an hour before they closed for the afternoon, so I didn’t have time to enjoy a starter before my main course.  Instead, I opted for one of their vegetarian pasta dishes – ravioli stuffed with herbed ricotta, then topped with roasted tomatoes and basil oil.  The chef created a complimentary vegetarian amuse bouche for me, and I had a lovely glass of local white wine with my meal.

For something even more casual, Caffe Roxy is a typical Italian cafe that is also located on the main street to the castle.  It’s a great place to stop for dessert or a cup of hot chocolate, and they usually have a fixed-price lunch menu available (though it’s unlikely to be vegetarian-friendly).

How to Get to Rivoli, Italy

Corso Francia draws a straight line from the center of Turin to, well, France, passing through Rivoli along the way.

So, if you’ve got a car, it’s an easy drive.  You can see the straight line of Corso Francia in the photo above.  Once you arrive in Rivoli the route to the castle is well-signed in both English and Italian.

The journey is a little bit more complicated if you’re using public transportation (like me).  There is only one bus that runs along Corso Francia all the way to Rivoli – #36.  Technically, it travels all the way from Piazza Statuto in the center to Rivoli in the west, but it’s much faster to cover some of the distance on Turin’s metro.

To get to Rivoli, Italy on the metro, you should catch any train in the direction of Fermi.  Get off the train at Massaua or Marche station, go up to street level and look for the stop for Bus #36 (heading towards the mountains, not back towards the city).   Take the bus to the end of the line, and then keep walking across the street in the same direction.

You’ll see a narrow pedestrian street lined with shops.  This is the most direct, and most scenic, route to the castle.  Along the way you’ll pass the restaurants, cafes and landmarks that I noted earlier in the post.  Keep going uphill and you’ll arrive at the castle within fifteen minutes.

If Rivoli has piqued your interest and you’re considering making it an overnight visit (perhaps you don’t want to drive back to Turin after a multi-course dinner and wine pairing at Combal.Zero…) there are a few good hotels in Rivoli.

Di Ago In Ago is a family-run bed and breakfast on Via Roma, right in the historic center of Rivoli.  The family that runs the B&B has owned the property since the 1700s, and now they welcome guests into clean, comfortable rooms situated around a sunny terrace.

Located a few blocks from the historic center in the town’s modern district, Rivoli Hotel caters to business travelers and family travelers with an outdoor pool, a fitness center, on-site parking and a complimentary breakfast.  Weekend rates here dip as low as €55.

For a complete travel guide to Turin, check out my comprehensive post about my favorite Italian city.


Traveling in Northern Italy?  I recommend a stop at QC Terme Milano, the city’s most luxurious day spa and sauna.

A Guide to Vegetarian Food in Kiev