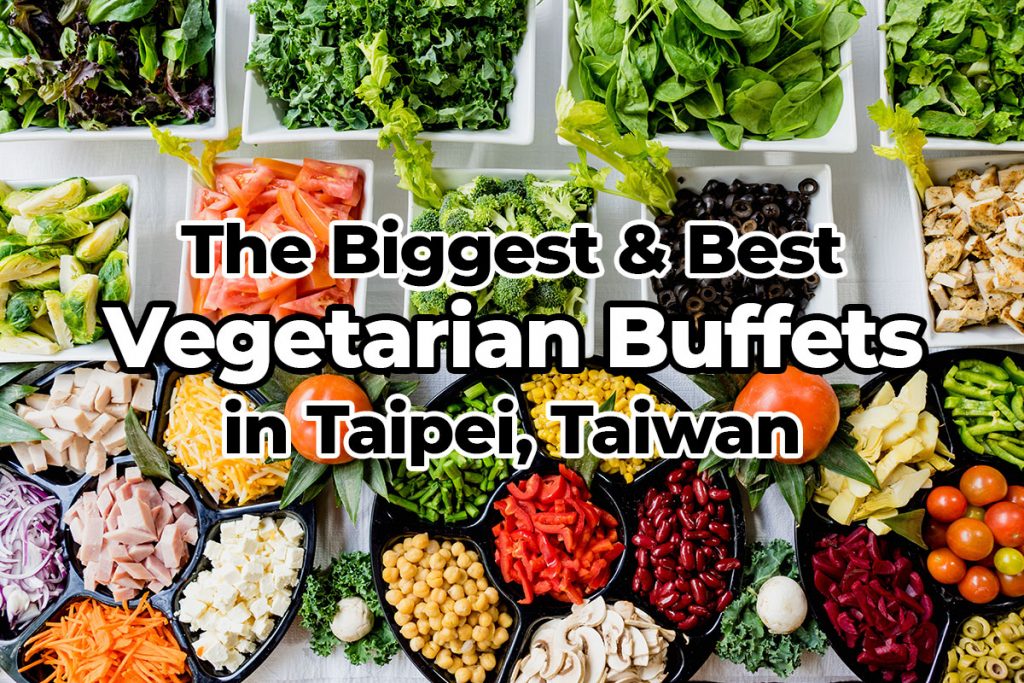 I recently traveled to Taipei, Taiwan, and was blown away by the amazing vegetarian and vegan food in the city.  Taipei vegetarian restaurants serve everything from contemporary, international cuisine to meatless versions of typical Chinese dishes, and everything in between.  I even found vegetarian street food in Taipei, along with vegetarian options at Taiwanese night markets! 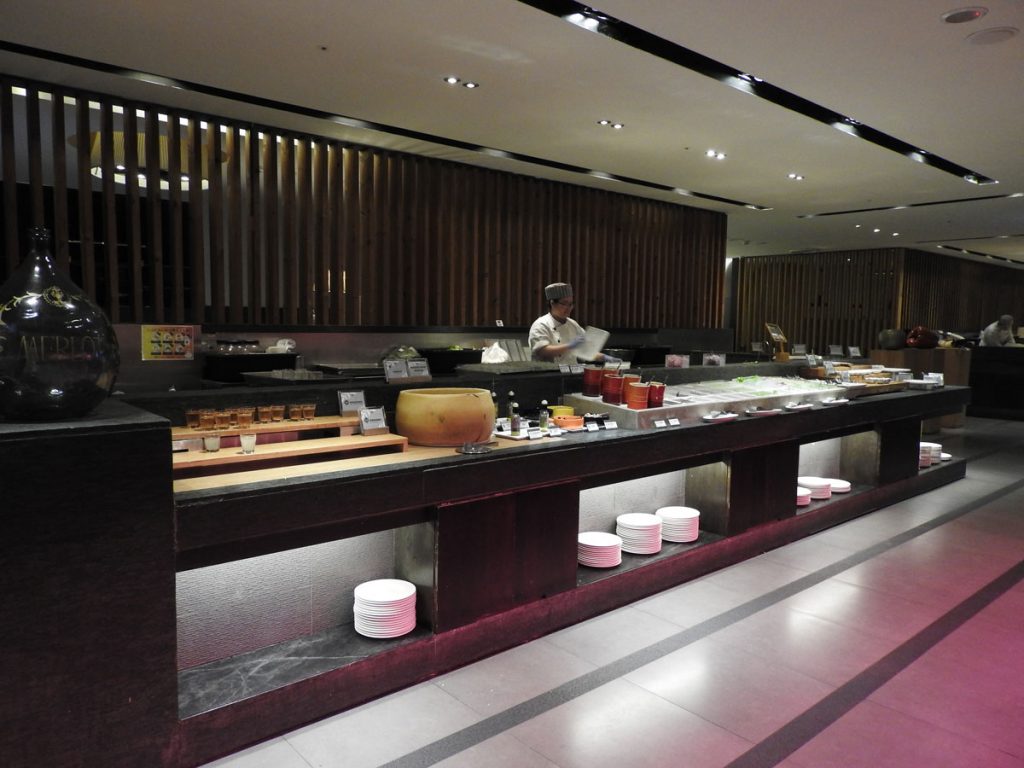 When I started researching Taipei vegetarian restaurants, Fruitful Food seemed to be recommended in every guidebook, newspaper article and blog post. I clicked through to their website and found that while all of the content was in Taiwanese, there was a special page in English that foreigners could use to reserve a table. So, I booked myself in for lunch on one of my last days in Taiwan.

Fruitful Food offers two seatings daily. Lunch service is booked for 11:30, and dinner is at 17:30. If you reserve for lunch, you are expected to eat your food and leave the restaurant within about three hours so that staff can refresh the dining room before dinner service. If you don’t arrive within ten minutes of your reservation, your table may be given away.  Plan to stay for at least two hours, as there is a lot to taste here! 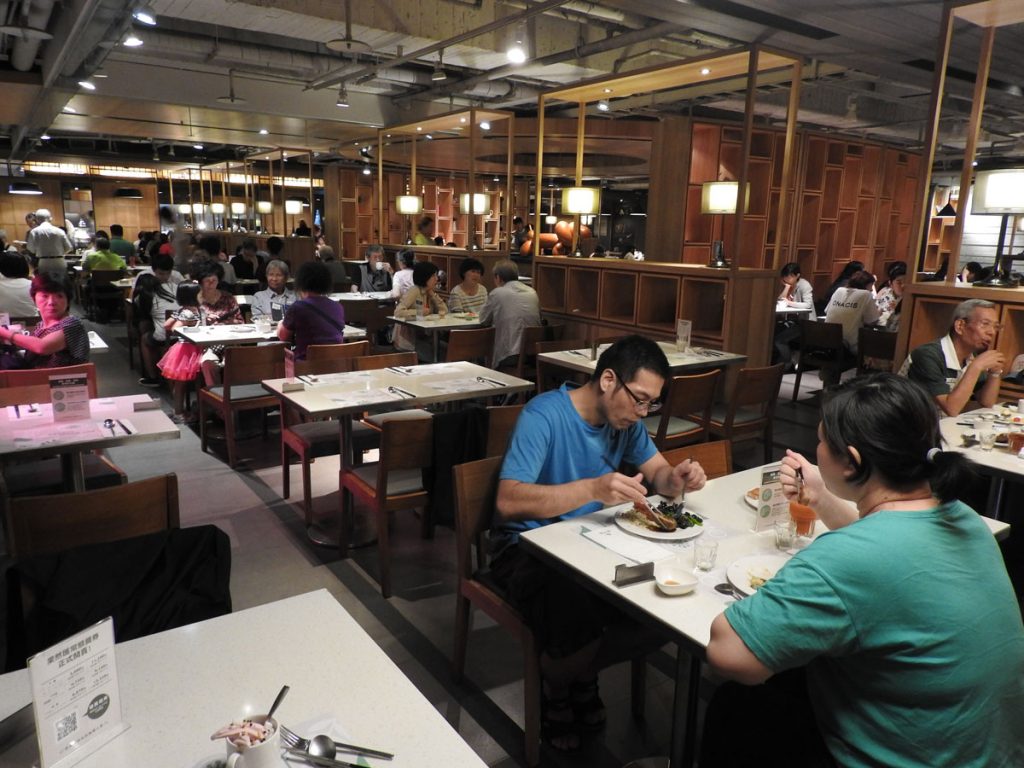 Fruitful Food is located on the 12th floor of the Ming Yao department store.  It’s a little bit hard to find the elevators (they are both internal and external, and kind of blend into the building) but once you arrive, you’ll be impressed by the clean, bright interior.

I was shown to my table by an English-speaking staff member who explained the layout of the restaurant to me.  As I moved around from station to station, I was greeted by all of the employees and some attempted to help me with English.  Overall it was quite friendly, and they seemed very used to having foreign visitors.

When it comes to Taipei vegetarian buffets, Fruitful Food is the clear gold standard.  I started with a plate from their Japanese section, including several types of tofu, oyster mushroom onigiri and even a little cup of tempeh with mixed vegetables.  For my next plate I went to one of the Chinese sections (grouped by regional specialities) for steamed buns and dumplings, with veggies and even a salad roll.  Almost-finally I went to a different Chinese counter for cabbage, tempura burdock root, mock meats and even mashed potato in a fried pastry parcel.

Every single dish had its own unique flavor and texture, so it was a total sensory experience.  I got so absorbed in my food that I forgot to photograph everything, as I actually also had a bowl of their creamy mushroom soup and a plate of “Western” food including truffle risotto, pesto pasta and margarita pizza.  Even with all of that, I would say I only sampled about one-third to one-quarter of what was on offer!

Fruitful Food also had amazing desserts.  My first plate was what I collected on a circuit through the regular buffet stations, looking for interesting dishes that might be sweet.  I had some mochi, sushi made with peanut butter and apple (!), fresh fruit and grilled fruit with cinnamon (amazing).  Then, I went to the dedicated dessert station for chocolate lava cake, chocolate torte, a crystal mochi with rose inside, a fleur-de-sel chocolate cookie and even a grilled grapefruit.  Not shown?  The bowl of ice cream (cranberry, and apple-rose) I ate afterwards!

I ate at the Fruitful Food location on the 12th Floor of the Ming Yao Department Store in the Da’an District of Taipei. It is right outside the Zhongxiao Dunhua Station on the blue line.

Fruitful Food Taipei | Reserve your table online up to ninety days in advance. It’s rarely possible to get a table on the weekend without a reservation. 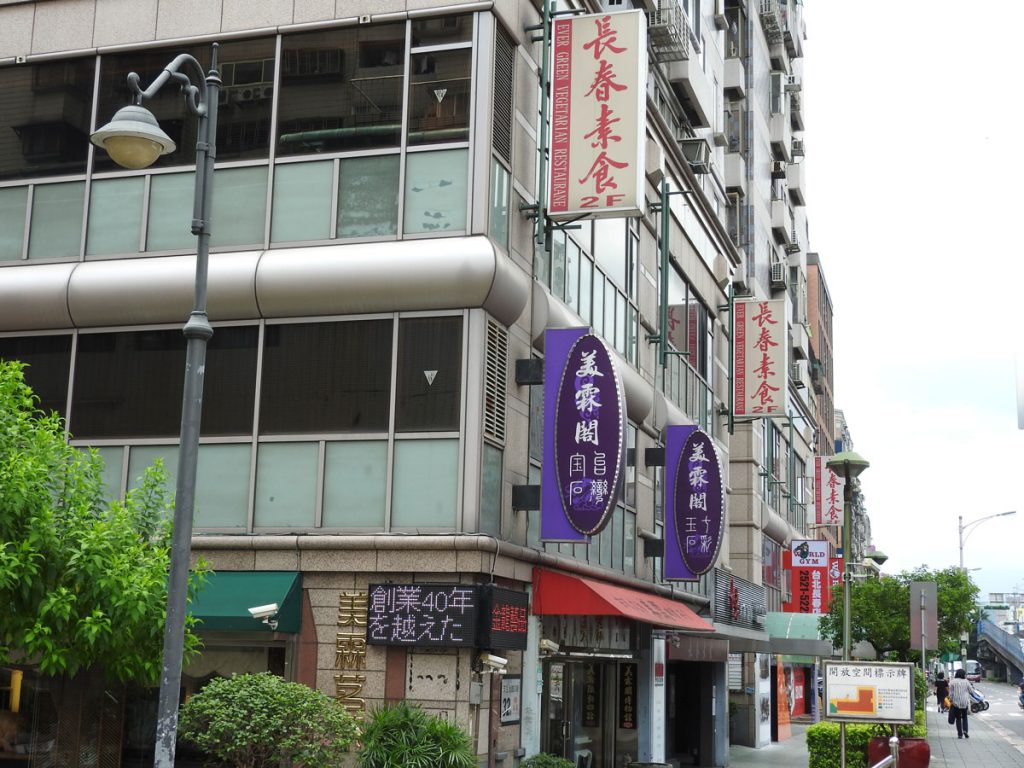 I’m not exactly sure how I learned about Evergreen Restaurant, since it doesn’t seem to get a lot of coverage in the English press or on social media.  However, I found myself there on my second full day in Taipei, the only (visible) Westerner in a restaurant that was surprisingly unfamiliar!  I’m not entirely sure if the restaurant is vegetarian or vegan – I would have thought it was vegan, but some of the desserts (and this weird little pot of mashed sweet potato covered in creamy… cheese…?) made me wonder if there was some dairy being used. 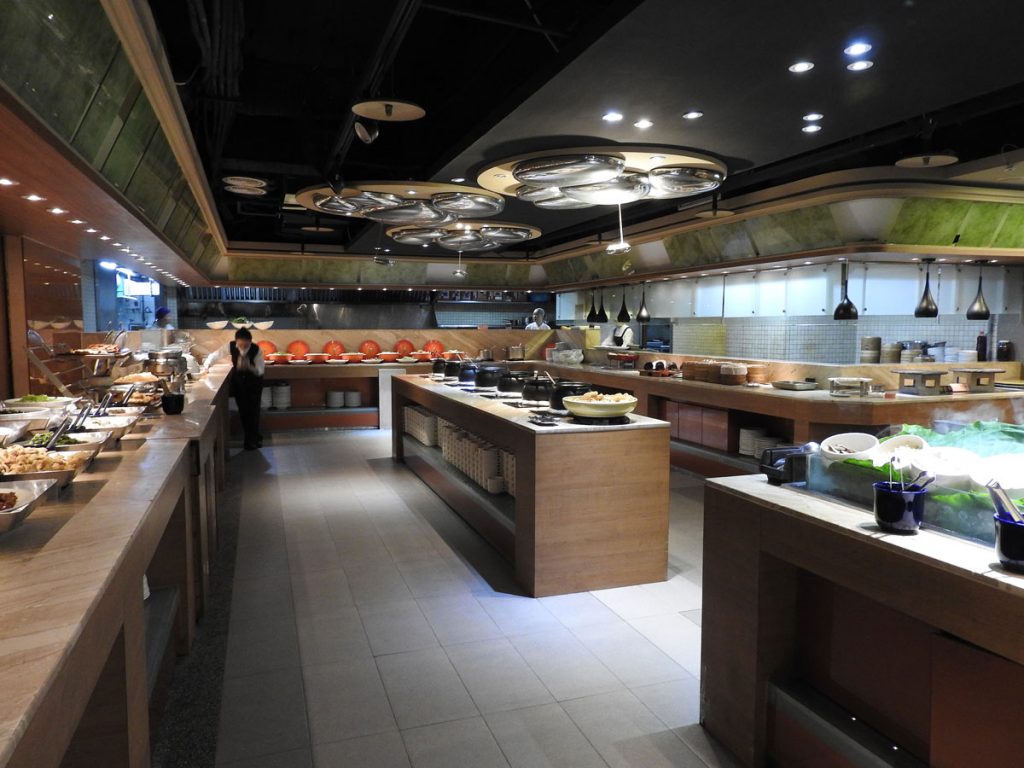 The atmosphere at Evergreen Restaurant reminded me a bit of the more old-school Chinese restaurants back home in Canada, with a low ceiling, lots of dark walls and dark wood, and a focus on large tables for groups celebrating special events.  I was seated at a table for two with a nice view of the restaurant, and there were a good number of monks at the tables surrounding me.

It’s important to note that there aren’t really English-speaking staff at Evergreen, and nothing is labeled, so you may feel a little bit lost.   If you’ve got Google Translate on your phone you can usually use it to ask yes/no questions to the staff, who will assist as best they can.  I found it pretty easy to navigate the different sections of the buffet, though I did get confused at the parts requiring staff support.  I managed to get a hotpot made to order, but I think there may have been a stir-fry station and/or a sushi cone station that I simply didn’t notice due to my general confusion. 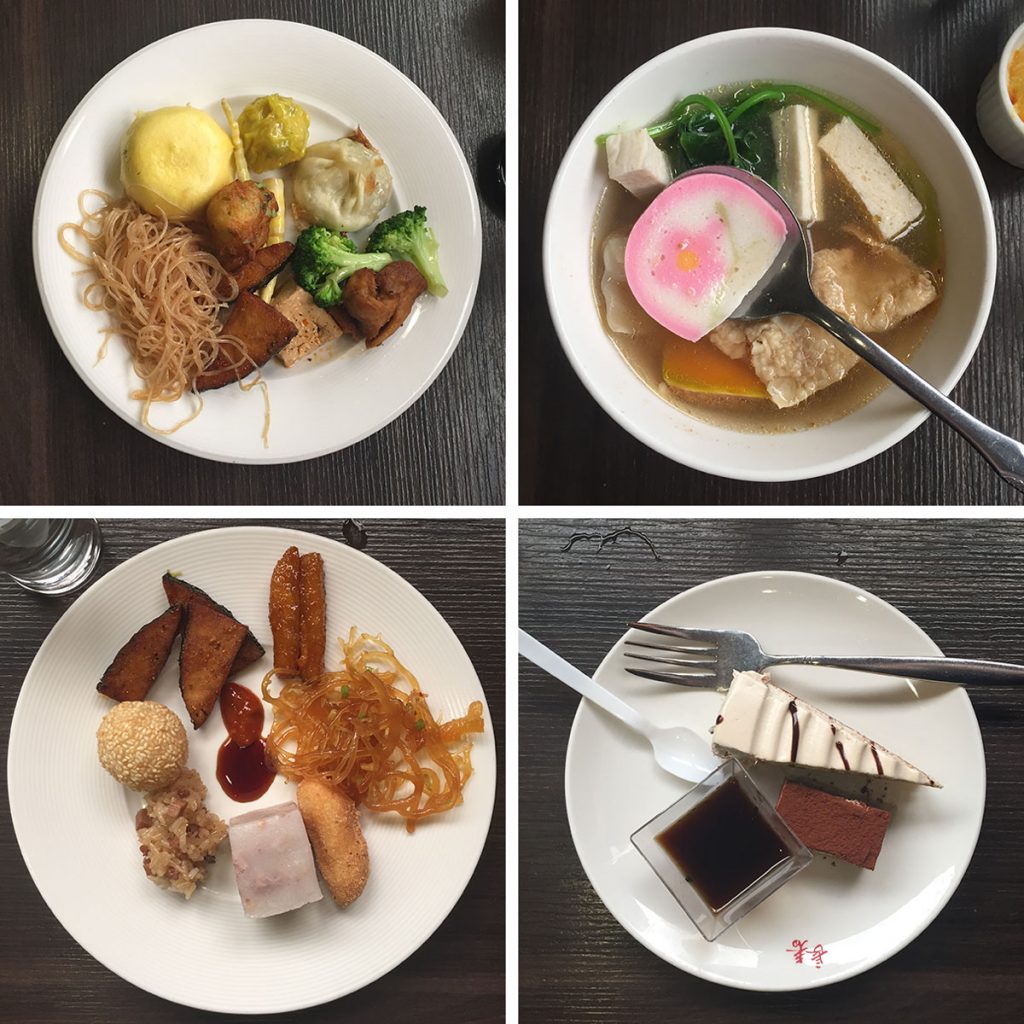 While Fruitful Food has something for everyone, Evergreen has everything for someone, and that someone is a person who dreams of the days before they were vegetarian, when they used to eat weird-ass food like turtles and baby dolphins.  The former is a real dish that they serve, while the latter is just me being hyperbolic.

For a Westerner, the food here is weird, and since it’s not labeled it’s really hit-or-miss as to whether you’ll get something amazing or something delicious.  If you are more used to eating Asian food, you may find these vegan takes on traditional meat-based dishes more appealing, but overall I found that things were a bit bland and everything kind of tasted the same.  I mean, check out the soup in the top right, with a slice of mock ham with a picture of a flower in it.  It tasted as unpleasant as it looked (though I served this to myself, so it’s my fault for choosing mock flower-ham).

A highlight for me was the desserts, because I accidentally chose three things that all tasted exactly the same.  Fortunately, they all tasted like coffee, which is one of my favorite flavors!

I feel like I’m speaking badly of Evergreen Restaurant, but what I really mean is that the food here is mostly traditional Taiwan vegetarian dishes inspired by popular Taiwanese meats.  If you can read traditional Chinese, or are traveling with someone who can, you might really enjoy this adventurous vegetarian dining experience.

Evergreen Vegetarian Restaurant is located at 38, Section 2, Xinsheng North Road.  It takes about ten minutes to walk to the restaurant from the Zhongshan MRT station.  If you can’t find it on your Google Maps, try copying and pasting this Taiwanese text: 长春素食.  The restaurant is on the second floor of the building shown above, which I found quite easily. 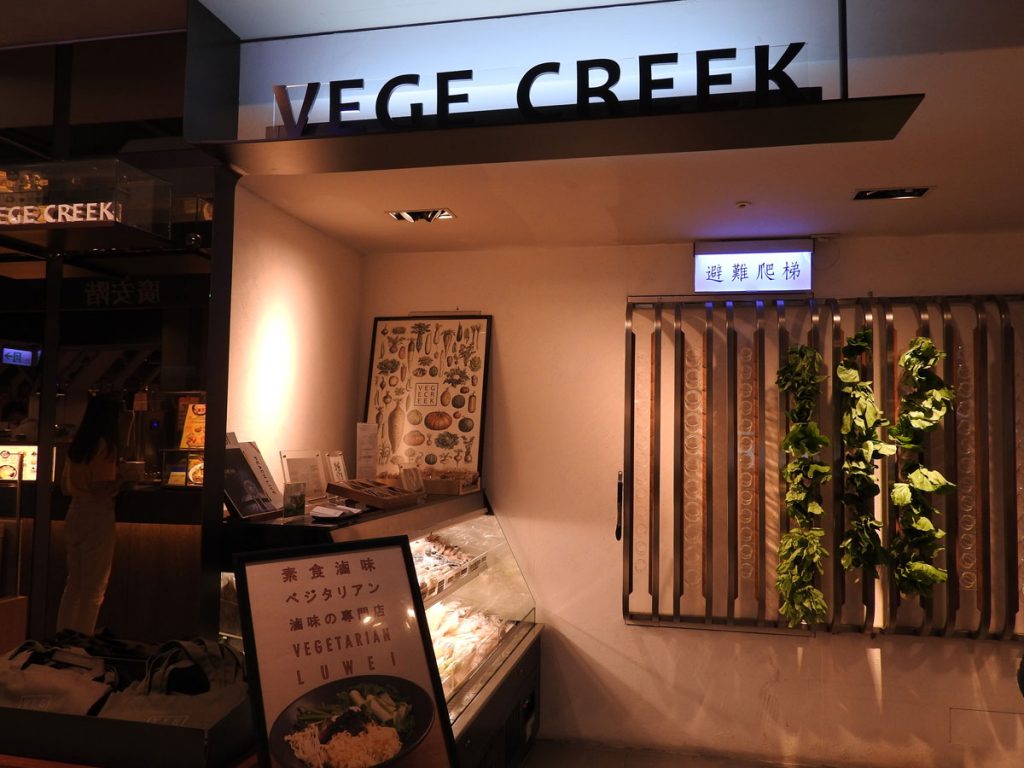 I’ve been a vegetarian for about fifteen years now (you can read more about my vegetarian travels!) and I’ve often felt like hotpot was one of the hardest dishes to find in a vegan or vegetarian version, since 99.99% of the time the broth is beef-based.  So, I was really excited to see that there is a chain of Taipei vegetarian restaurants called Vege Creek that specialize in personal, plant-based hotpot.

(I am 99% sure that Vege Creek is actually fully vegan, but you’ll want to ask before you eat!) 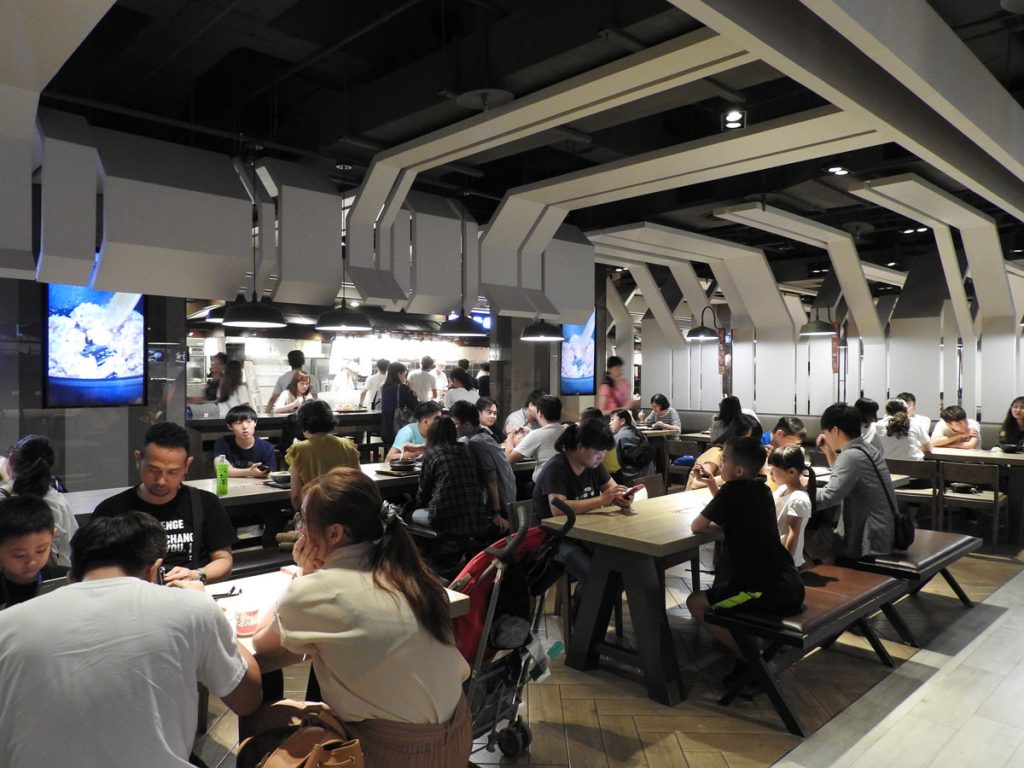 Since Vege Creek is a chain, the atmosphere will depend on the location that you visit.  I went to the location closest to my hotel, in the Shin Kong Mitsukoshi Store, which was in the busy food court.  It’s not exactly a buffet, but since it’s serve-yourself from a big fridge of choices, I thought it was fair to include it in this post!  The food court itself is very busy, so expect to share a large communal tables with locals and maybe even some other in-the-know tourists. 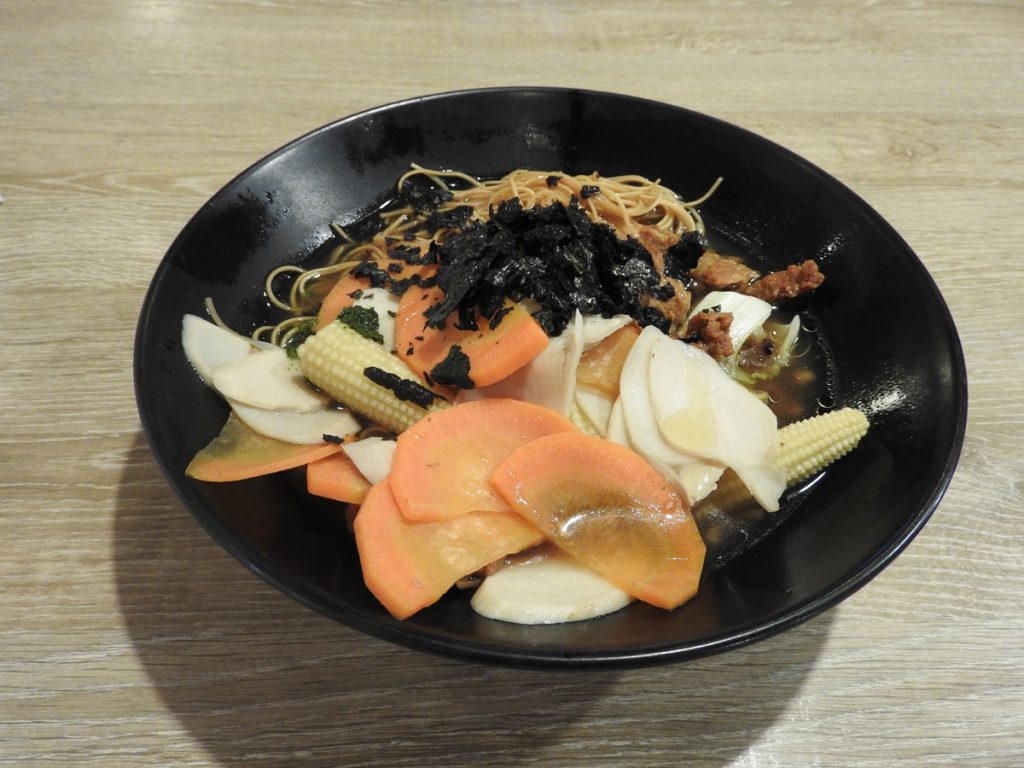 The staff at Vege Creek spoke English and explained to me that I could choose my hotpot ingredients from the refrigerator (prices were marked for each ingredient) and then put them into the green cloth bag.  If you want noodles, take one of the metal noodle sticks and add it in, and if you want fresh greens you can pick them right from their living wall.

Once you pay, they will put your ingredients into an individual metal basket and dunk them into the broth, cooking them to perfection (and adding in the noodles at precisely the right moment).  You’ll receive a buzzer to alert you when your food is ready, and you can then garnish your hotpot with all different condiments including nori, sesame oil, chili oil, miso and more.  Don’t be afraid to garnish liberally, as the stock itself is very mild!

I went for a hotpot with savoy cabbage, carrots, mushrooms, baby corn, sliced oyster mushrooms, mock meat and thin noodles.  I seasoned mine with nori, sesame oil, garlic-ginger oil and toona (a leafy green, here combined with oil to make a vibrant green paste).  I really enjoyed my soup, but as I mentioned above, next time I would go a little crazier with the garnishes to intensify the heat and flavors.

Vege Creek has locations all over Taipei.  The one I went to is just a block or two south of Taipei Main Station, in the basement level of Shin Kong Mitsukoshi Store.

Heading to Taipei?  Check out my recommendation for an affordable upscale hostel with only private rooms (yes, no dorms!).

Did you think it was impossible to travel the world as a vegetarian?  I hope this post proved you wrong, but if it didn’t, click through to my full vegetarian travel post, where I talk about eating meatless around the world for the past fifteen years!

13 Vegetarian Foods in India You Absolutely Have...