If there is one question that I get asked again and again, it is, “How do you make friends while traveling?”

I’ve always thought this question was kind of crazy, because I’ve always found it easy to make friends while traveling.

For me, the mystery has always been, “How do I make (cool) new friends in my home city when I’m a thirty-something single girl who spends ten hours a day at work, with the same people, in the same place, for years on end?”  (If you know the answer to that question, let me know in the comments!)

But when it comes to exploring the world, I know exactly how to make friends while traveling.  In fact, I see potential travel friends everywhere I look!

The following are just some of the ways that I meet new people while I’m traveling, especially during those times that I’m not staying in a hostel.

Wait for Your Bags… Together

You can start to make friends while traveling as soon as your flight lands. What else are you going to do while you’re stuck at the baggage carousel, waiting for your bags?  This is the perfect time to approach someone new and spark up some conversation.  I get so chatty at the airport that the customs officers never believe I’m traveling by myself – they always tell me to bring my “travel companion” to the window with me, and then I have to admit I just met them five minutes earlier!

Think your target is a local?  Ask them to recommend a secret hot spot that only locals would know about.

Got your eyes on another tourist?  Ask them how they’re planning to get to the city center. 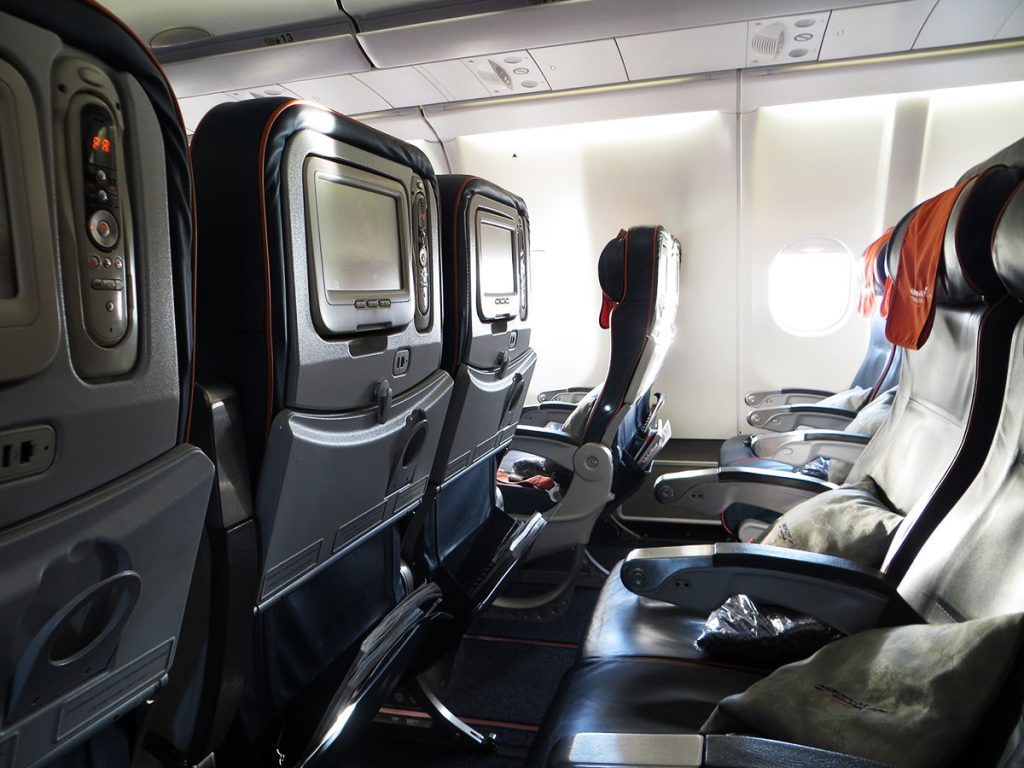 Sure, you could spend the entire trip staring at the TV show you downloaded onto your laptop.  But The Handmaid’s Tale will still be there when you get home (at which time you seriously need to watch it!).  I always make friends while traveling with people I’ve met on the bus, on the plane and on the airplane.  When I was in Belarus I noticed a guy who looked foreign on the bus from the airport to the city center.  I introduced myself, and it turns out we both had reservations at the same hostel for the same number of nights.  We spent the next four days exploring Minsk together!

My go-to strategy for breaking the ice in transit is to point out something interesting out the window.  “Look at that monument!  Have you ever seen something like that before?”

The people you meet at the airport or on the bus are going to be pretty random.  If you want to connect with people who share your interests, consider signing up for a class.  I’m a bit of a vegetarian foodie, so in Bangkok, I signed up for a private market tour (that’s my guide in the photo!) and cooking demonstration just a few blocks away from my hostel (the awesome The Yard Hostel in Bangkok – they can help you organize all sorts of cool activities).  Almost twenty other people from around the world showed up, and we spent the day together learning about Thai food, sharing culinary tips from our home countries, and then venturing out to the nearby night market for live music and beer towers!  A few years later I took a real cooking class in Ubud, Bali, where I partnered with another vegetarian solo traveler and we prepared six Indonesian dishes together!

Ask a question!  If you’re taking a yoga course by the beach, ask your classmate if they’ve found any good smoothie shacks nearby.  Taking a language class? Ask the top student for pronunciation tips.

Free walking tours are a fantastic way to make friends while you’re traveling, because they attract such a diverse group of people.  It’s not uncommon to have more than ten nationalities represented on a tour, and there’s likely to be a huge age range as well.  With so much diversity, it’s almost impossible not to find someone you click with!  The best free walking tours split larger groups into small sub-groups, so that you’re getting to know twenty people rather than barely remembering the faces of fifty strangers!  (Remember to tip the guide on your free walking tour – nobody wants to make friends with a mooch!)

When I did the free walking tour in Cologne, Germany, most of the other travelers were solo but nobody was really engaging with one another.  I almost wrote off the whole tour, but I was sure that there must be someone else who was interested in being social.  So, at the end of the tour I said, “Hey guys, I’m going to grab lunch… and some beers… at a German restaurant nearby.  Anyone want to come?”  Almost half of the group (including our guide!) wanted to join me, and we ended up lunching together for hours.  After lunch some of us continued adventuring together, and we’re still in touch today (across four continents)! 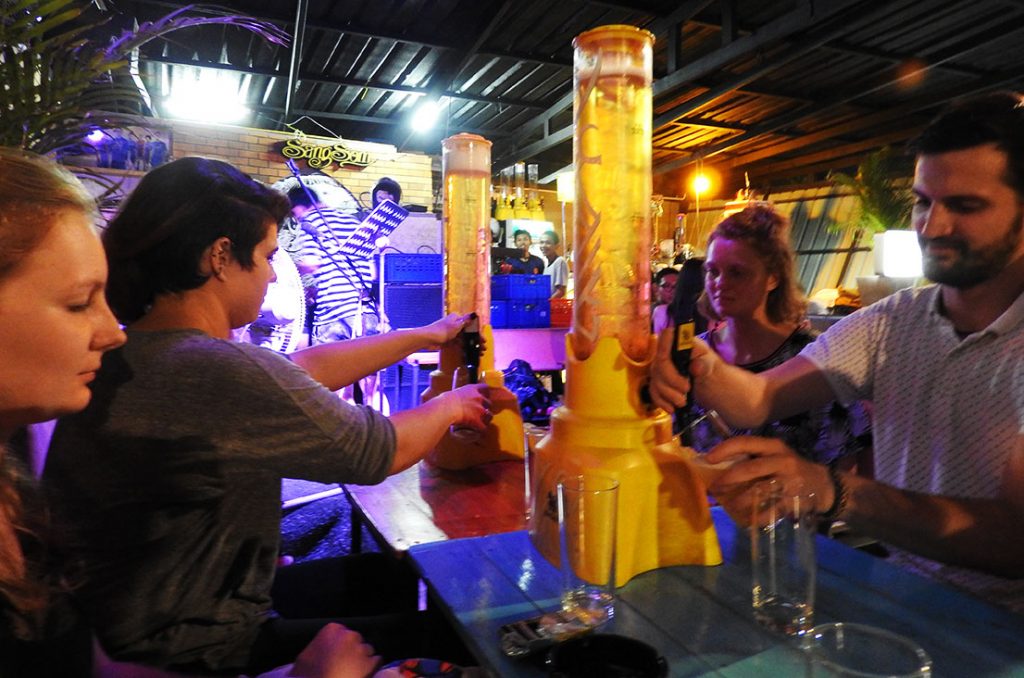 Last summer, I joined a free pub crawl in Tbilisi, Georgia. It wasn’t the best pub crawl ever (we took a thirty minute detour so that one girl could use an ATM?) but I ended up meeting lots of really cool people as wandered from wine bar to wine bar (… to shot bar!).  In fact, I ran into some people from the pub crawl a week later in the middle of the forest in Mestia, and we ended up having dinner together before driving all the way back to Tbilisi together the next day.

Recently, I’ve become more convinced than ever that technology is an essential tool for solo travelers who want to make friends while traveling.  My favorite app for meeting new people while traveling is Couchsurfing.  I’m not really into hosting surfers or sleeping on other people’s couches, but I love the event listings (visible online and on the app) and the hangout tool (app only).

In Minsk, I used the hangout tool to find other people in the city who were free to meet up right away – we ended up going to a craft brewery together and then going out dancing until dawn.  Now, I’ve got plans to meet one of the Belorussian girls from that night in Warsaw later this summer!  During the World Cup I also used the hangout tool to meet other travelers who wanted to watch a game.  We hit it off during the quarter finals and ended up watching six games together!

It might sound crazy, but I have also had success using Tinder and Bumble to meet other travelers while I’m overseas.  It can be a little bit flirty, but even if you don’t click romantically with someone there is a good chance you can still have fun exploring a new city together.

A Table for Two

I am always torn in restaurants, because I love savoring a meal on my own, but I also know that restaurants are a great place to make friends while traveling. As a solo diner you’re likely to be seated at a table for two, so let the restaurant staff know that you’re happy to share your table if they’re getting full.  They might seat someone with you, or you can even invite another solo diner to join you.  When I was in Roatan, Honduras, I asked another solo diner if I could join him (his table was bigger!) – it turned out we were staying at the same hotel so we made a standing breakfast date for the rest of our trip.

In a busy restaurant?  “Hey, they’re turning people away!  Want to share a table so that more people can try this delicious food?”

Lots of free tables? “This veggie burger is so good… I can’t believe there aren’t more people here!  Want to join me?”

Bold Move: The Cold Open on the Street

This trick for making new friends while traveling is only for the bravest solo travelers, so consider working your way up to this move.  Basically, it involves walking up to someone on the street and saying, “Hey, are you a solo traveler?”  It sounds totally crazy, but it’s a trick I’ve used successfully in the past.

In fact, last Christmas I was staying in a private hotel room in Nicaragua, and hadn’t really met anyone else.  When I was eating lunch I noticed another girl walk past my restaurant alone, several times, looking a little bit confused.  I saw the same girl later that afternoon, crossed the street and said, “Hey, I’m here on my own… are you?”  We got talking and ended up going to a pub trivia night later that day (spoiler: we lost big time!).

More recently, I was on a pub crawl in Kiev with some other travelers from my hostel.  We were hanging out at a bar, when a guy walked up to us and said, “Hey, you guys are all speaking English!  Can I join you?”  He was in town on business and didn’t know anyone else in the city, so he joined our group for the evening and then we met up again the following night.  He just had to break the ice!

Weren’t you paying attention?  It’s as easy as “Hey, are you a solo traveler?”

Tried one of my tips?  Let me know how it worked for you!

Did I forget any amazing ways to make friends while traveling?  Let me know in the comments!

Controversial Travel Lessons We Should All Learn from...

What Is a Yoga Retreat in India Really...