My last trip to Berlin was divided between two hotels.

I chose Hotel 38 because it had great reviews on Booking.com and it was smack-dab in the middle of one of my favorite areas in Berlin, with fantastic transportation connections and several of my favorite restaurants within a five-minute walk.

Also, there aren’t very many cheap hotels in Berlin (especially in the center) and Hotel 38 has affordable single rooms for solo travelers.

I chose the cheapest room at Hotel 38.

My single room was located on the first floor (one above ground level) and had large windows opening into an interior courtyard.  My room did not have air conditioning, but there was a fan to keep things cool.

It also had a single bed, a fan and a wall of hooks by the door where I could store my purse, jacket and umbrella.

My single room at Hotel 38 Berlin also had a small desk, a chair and an open closet, which I took full advantage of during my six-night stay.

I was pleased to discover that the bathroom in my room had been recently refurbished with modern amenities.  There was a large shower, toilet and sink, all of which were spotless.  Simple toiletries like soap, shampoo and a shower cap were also provided.

The bathroom had enough counter space for most of my toiletries, which I packed in the (gigantic) toiletry bag I bought on Amazon especially for my European getaway.

(A few weeks after I took this photo I accidentally spilled an entire bottle of tea tree oil inside that toiletry case, and I’m happy to say that it soaked up all of the oil, preventing it from damaging my other possessions.  Unfortunately it did end up smelling like tea tree oil for the next month, though!)

Some cheap hotels in Berlin cut costs by skipping out on the complimentary breakfast.

Fortunately, even though Hotel 38 is cheap, it still provides a filling breakfast to fuel you up before a day of sightseeing in Berlin.

The breakfast at Hotel 38 consists of fresh bread, vegetables, meats, cheese, yogurt and cereal, along with a few prepared hot dishes included omelets and sausages.  They usually put two or three different kinds of omelets into the same dish, so you can ask staff for help choosing one that is plain, with vegetables or with meat.

Beverage options include American coffee, tea, milk and juice, and you can order an espresso or cappuccino for a small extra fee.

The breakfast room is quite lovely, with comfortable indoor seating and, weather permitting, outdoor seating on their interior terrace.

For larger groups, or during busy periods, there is also a communal dining table in the breakfast room.

The Best Location in Berlin

Hotel 38 is located at Oranienburger Strasse 38 in Mitte, Berlin.  I am in love with this location.

From here, you can easily walk to Alexanderplatz, Museum Island, Hackescher Markt and Unter den Lindenin less than ten minutes.

Got twenty minutes?  You’re within walking distance of the Brandenburg Gate and the Reichstag too.

Thirty minutes?  You can get all the way to Potsdamer Platz, Checkpoint Charlie and the Sunday flea market at Mauerpark.

If you’re not into exploring Berlin by foot, you can jump on board Bus #100 for a €3 bus tour of the city’s top attractions.  Trams stop directly in front of the hotel’s front door, and you’re only twenty meters from an entrance to the Oranienburger Strasse S-Bahn station.

Furthermore, many of my favorite restaurants in Berlin are located on the streets around Hotel 38.  I can recommend Dada Falafel, Momos, Hummus & Friends and House of Small Wonders, all of which have fantastic vegetarian options.

I made my reservation at Hotel 38 on Booking.com, like I always do.  As far as I know, Hotel 38 doesn’t have its own independent website, and the price on Booking.com was lower than what I found on other sites.

Single rooms at Hotel 38 begin at €80 per night, including breakfast, and double rooms begin at €90.  Typically, rates are fully refundable up to seven days before check-in.

To put this in context, Hotel 38 is directly across the street from one of the Generator Hostels in Berlin, which charges the exact same price for a private room.  In a hostel.  And breakfast is not included.

A private room in a three-star hotel for the same price as the hostel across the street?

If you’re open to spending a little bit more money, I highly recommend booking a room at Casa Camper.  It’s only a few blocks from Hotel 38 but offers a few extra amenities (like complimentary all-day drinks and snacks!) to make your stay even more comfortable.

Need a guidebook for your trip?  I spent an entire weekend reading ten different Berlin guidebooks and narrowed it down to the very best for every style of traveler.

Splurged on a private hotel room and now need to cut costs from other areas of your travel budget?  I know an amazing alternative to those expensive hop-on, hop-off sightseeing buses.  Find out how to see Berlin by double-decker bus for less than €3. 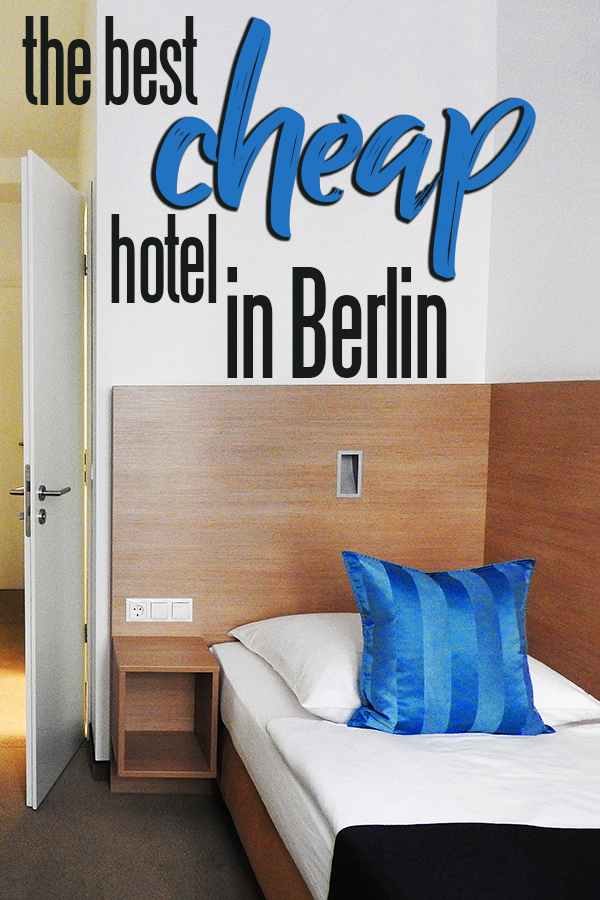 The Perfect Turin, Italy Travel Itinerary for 2 or 3 Days

Sicily Itinerary | Around the Italian Island, No...