Things To Do in Lyon, France – Itinerary for 1 or 2 Days 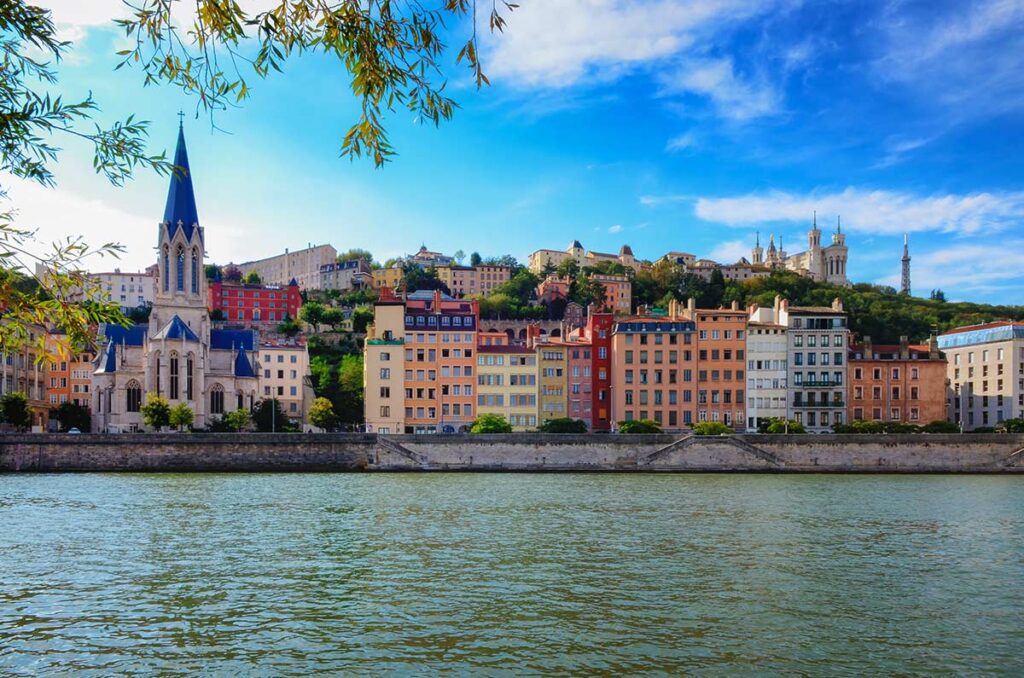 I recently spent two full days in Lyon, France, and from the moment I arrived I couldn’t stop messaging my friends and family back home, saying, “Guys, you have got to come to Lyon! You’ll love it!” Because it’s the third-largest city in France, there are so many things to do in Lyon that you’ll never get bored.

Despite its size, the atmosphere in Lyon retains a lot of old-town charm: it never feels large, locals seem happy to have foreign tourists visiting their city, and you can walk almost everywhere you’d want to visit (though you may have to climb a hill or two!). Lyon felt like such a breath of fresh air after spending a week in busy Paris, and since it’s only two hours away by train it’s a perfect overnight getaway for travelers who are based in Paris, but want to also experience something a little less touristy.

Generally speaking, the best things to do in Lyon are spread across four areas of the city: Vieux Lyon, or Old Lyon, the City Center, Croix-Rouges, and La Confluence.  You can explore all of these areas if you have two full days in the city, though if you’re only in Lyon for one day I would recommend sticking just to the sights and attractions around Vieux Lyon.

Things to Do in Lyon in One Day

Lyon is compact and walkable, and you can fit a lot into one day if you are smart about planning your route and using transit to cover longer distances.  You’ll probably be tempted to start your first day in Vieux Lyon, or Old Lyon. This is a great plan, but before you cross the river you should pick up a Lyon City Card at Place Bellecour in the city center, or in the shopping center opposite the main train station.

1. Start by Buying Your Lyon Card

Lyon’s City Card is one of the best all-inclusive city passes in Europe. Cards are valid for 1, 2, 3 or 4 days, and include admission to nearly all of the city’s most important attractions. It also includes full access to the city’s public transportation system.

You can buy a Lyon City Card upon arrival, but if you pre-pay online through their official site you can often get an even bigger discount.  Upon arrival in Lyon, you can pick up your card at the ONLYLYON Tourism Pavilion in Place Bellecour (Metro Bellecour) or at the reception desk in the shopping station across from the main train station, and it is activated when you first use it on the transportation system or visit an attraction.

A somewhat garish church perched high above the city (a bit reminiscent of Montmartre’s Sacre Coeur), Notre Dame de Fourviere is worth a quick visit while you’re up the hill.  Built in 1872, the basilica features a large upper church, with ornate decor, and a more simple lower church crypt built directly underneath the higher church. Inside you’ll find six stained glass windows, six mosaics and a stunning staircase known as “The Stairs of Wisdom”.

I was especially interested in the displays in the crypt, which highlighted many of the places around the world where the Virgin Mary has (supposedly) appeared, like in Mexico City and in South India.

Also at the top of the funicular, the LUGDANUM Gallo-Roman Museum is an archeological museum highlighting the city’s history through a large collection of ancient artifacts collected around the region.  The architecture of this museum is referred to as “audacious”, and you really have to see the interior to appreciate the design that contrasts its brutal contemporary architecture with the ornate Roman relics.  It was just as interesting to go outside and visit the Roman Theatre, the Odeon and the Roman Baths, three well-preserved constructions dating back to the first century CE.

Tip: You don’t have to pay to enter the gardens, where you can stroll through the ruins of the theatre, odeon and baths. However, this is the one museum in Lyon that I would recommend paying to visit (of course, it’s free if you have a city card!).

4. Visit the Cathedral of Saint John the Baptist

When you’re finished at the top of the hill you can walk or take the funicular down to the lower station, which is just a block away from the Cathedral of Saint John the Baptist. This church dates back to the late 1400s, and while its interior is much less elaborate than that of the church above it, it’s still evocative (and a nice, cool place to escape the summer sun!). While you’re inside, look for the original astronomical clock, which was built in 1661 but renovated during the French Revolution to remove all of the royal family’s insignia.

Lyon is home to layers upon layers of human histry, and UNESCO has designated 10% of the city, including 162 specific buildings, as a UNESCO World Heritage Site.  The entire Vieux-Lyon (“Old Lyon”) neighborhood falls under this designation, and wandering around these ancient streets is a highlight of any visit to Lyon.

Most of the buildings in Vieux-Lyon date back to the Renaissance, and many were homes to important figures of that time.  Look out for the Maison du Chamarier (the man who literally held the keys to the city’s gates would occupy this building), Place de la Baleine (wonder to yourself why this little square was named for a whale!) and a number of spooky gargoyles looking down on you from the rooftops above.

6. Get Lost in Lyon’s Secret Passages

Lyon used to be a center of the European silk trade. It was essential to keep the fabrics dry, so the city built a network of more than 400 narrow passages that allowed merchants to move the fabric around the city safely on rainy or snowy days. Today, about 40 of these passages are still accessible to the public – if you see a narrow passageway that appears to be open, just wander inside and take a look!

7. Cross the Saone River (Or Cruise It!)

From Vieux Lyon you can cross Ponte Bonaparte to be back in the city center, near Place Bellecour.  On the city center side of the river you’ll find the dock for the Bateaux Lyonnais river cruises.  Short sightseeing trips are very affordable (you may be eligible for a free or discounted trip with your Lyon City Card – ask at the booking counter!), and more luxurious lunch or dinner cruises are available as well (reservation required).

Tip: Even if the website doesn’t show availability, pop by the ticket office in person to inquire.  I was able to get a (free!) ticket for a sailing that was fully booked online just by showing my Lyon City Card at the booth.

Things to Do in Lyon in Two Days

If you have two full days in Lyon, start by following the one-day itinerary above.  On your second day, explore some other areas of the city, like the Lyon City Centre, Croix-Rouges or La Confluence.  All of these areas are easily accessible by public transportation.

1. Start in the Lyon City Centre

Lyon’s city center is located on a peninsula between the Rhône and Saône rivers that is less than a kilometer wide.  That makes it easy to explore this area on foot.  The highlight here is the dense collection of museums, such as the Museum of Fine Arts, the Fabric Museum, and the Printing Museum. All three are included in your Lyon City Card. While you’re in the area, make sure to check out the pretty squares at Place Bellecour and Place des Terreaux.

North of Lyon’s city centre is the Croix-Rouge District (the 4th arrondissement). This used to be the center of Lyon’s silk district, and your Lyon City Card gets you access to a former silkworker’s house as well as a restored silk factory.

There are some other oddities to explore in this area, including the “Gros Caillou”, a giant stone that the centuries moved all the way from the Alps to its current resting point, and Le Jardin Rosa Mir (open April to October) where the recently-restored walls, paths and decorations are made from millions of stones, pebbles and seashells.  Be on the lookout for murals, like the one photographed above.

3. Step Into the Future in La Confluence

As the name suggests, La Confluence is the district at the south of Lyon’s riverfront peninsula, at the confluence of the Rhône and Saône Rivers.  In my opinion, the best way to see La Confluence is via one of the Saone river cruises (See #7 above), as the contemporary architecture in this newly-developed area is best viewed from the water, rather than the street.

If you want to explore this area by land, it’s accessible by tram from the city center, or you can use the Vaporetto boat service (at €5 it’s a lot cheaper than a real boat tour, but there’s no audio guide).  Once you arrive, head straight to the Musée des Confluences, a monolithic building where the exhibits claim (and I paraphrase) to cover the entirety of human history and knowledge… in a kid-friendly way.  The museum was a bit too general for my tastes, but it would be perfect for families with children in Lyon.

There is also a nearby aquarium (again, great for kids), a shopping center and quite a few rooftop bars and restaurants that are perfect for sunset cocktails.

I was in Lyon over Bastille Day, when accommodation options were limited and most Lyon hotels had already sold out.  I was lucky to get one of the last rooms at Alexandra Hotel, a comfortable, four-star hotel about three blocks south of Place Bellecour and a five-minute walk from the Lyon Perrache train station, which is a secondary stop on many trains into and out of Lyon.  I couldn’t believe that a hotel in such a good location could have such a reasonable price!  My room here was super-spacious (including the bathroom!) and it had a beautiful view over Place Ampère.  I would definitely stay at Alexandra Hotel again, and can highly recommend it.

If there are no rooms left at Alexandra Hotel, a few other Lyon hotel options include:

Lyon is one of the world’s gastronomical capitals, and it is famous for both its traditional bouchons, low-key restaurants known for their hearty meat dishes, and its innovative nouvelle cuisine restaurants that are on the forefront of innovative ingredients and flavors.  In fact, Lyon has eighty-four restaurants that have earned Michelin mentions.

Personally, I am a vegetarian, so I didn’t even try to eat at any Lyonnaise bouchons.  As a budget-conscious traveler, I also decided to skip the Michelin recommendations. Instead, I looked for reasonably-priced vegan and vegetarian restaurants in Lyon, where I could still experience the city’s food culture without eating meat.  Lucky for me, I found some great restaurants:

Other Restaurants in Lyon, France

If you’re not a vegetarian or vegan, then there are many other memorable restaurant options in Lyon, France.  I can’t personally recommend any, but you should definitely check out the Michelin Guide’s Lyon recommendations, as well as the places that Anthony Bourdain ate on the Lyon episdode of Parts Unknown.

Lyon is only two hours by train from Vichy, one of Europe’s most iconic spa towns.  Before you visit this area, consider learning French for travelers, as many people outside Paris don’t speak English.

To read all of my France travel tips, click here.

Planning a trip to France? Pin this post for later!

Is Sicily Like ‘The White Lotus’? The Reality of Taormina, Noto & More

The Best Places to Visit in India (Go...