The Best Day Trips from Tbilisi (Including Gori, Mtskheta & More!)

Every winter, Lonely Planet selects the top countries, cities and regions for travel in the upcoming year.  The 2018 list includes old favorites like New Zealand, South Korea and China, along with a relatively-undiscovered destination: Georgia.  Lonely Planet notes that the Caucasian country is “forward-thinking but proud of tradition” and that the country’s rich history “informs every complex chess move” the nation makes today.

As someone who recently visited Georgia, I can’t think of a better destination for Lonely Planet to feature, or a better place for any traveler to consider visiting this spring, summer or autumn.  I will always remember Georgia as a country with unparalleled hospitality, (affordable) indulgent cuisine and breathtaking scenery that was unlike anything I’d seen before… much of which I experienced on a number of day trips from Tbilisi, the capital.

My trip to Georgia took place in 2017, shortly before Lonely Planet caught on to the country’s appeals. I spent about fifteen days exploring Georgia, using Tbilisi as the home base for much my stay.  I didn’t do a lot of trip planning before I went, so I didn’t have high expectations or detailed plans.  Instead, I spoke to local residents and other travelers, getting recommendations along the way, and managed to squeeze in day trips from Tbilisi to countless places that will be featured on my travel highlight reel for years to come.

Although I absolutely loved Tbilisi (and wrote an entire guide about it!), I really think that you have to get outside the city to understand what Georgia is all about.  Here are five of my favorite day trips from Tbilisi, all of which can easily be visited in a single day so that you can get back to Tbilisi in time for dinner (and wine!).  Expect to find everything from churches to cave cities to… the birthplace of jaywalking?

A Day Trip from Tbilisi to Mtskheta

Just a few kilometers past the northern edges of Tbilisi is Mtskheta (please don’t ask me how to pronounce that!), a modern city with roots dating back 2,500 years.  This is definitely one of the easiest day trips from Tbilisi because there are frequent minibuses between the Didube bus station in Tbilisi and the historic center of Mtskheta, or you can fill a taxi with your friends (or potential new friends!) and make the same journey for about $2 USD per person.

I recommend starting your visit at the Jvari Monastery, which is located just across the river from town (hop a taxi for this part of the trip – it’s too far to walk and should cost less than $5 USD return).  This UNESCO World Heritage Site has stunning views of the city and countryside below.  From here, head back into the city center to the Svetitskhoveli Cathedral, an early medieval cathedral that is thought to be the burial site of the robe worn by Jesus during his crucifixion.

A Day Trip From Tbilisi to Gori 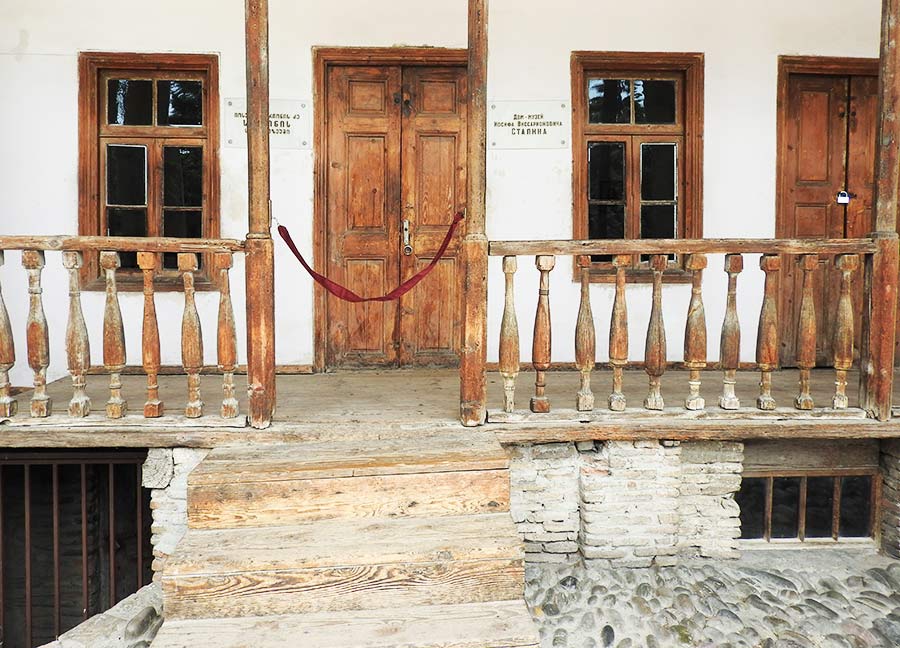 In 1920, more than one hundred Georgians died in The Gori Earthquake.  The earthquake decimated buildings throughout the town, forcing businesses to close and people to leave in search of employment.  Although the city never recovered economically, the aftermath of the earthquake led to a unique local tradition – jaywalking.

You see, when Gori began to rebuild its destroyed buildings, locals thought that the buildings were made from cheap materials and shoddy techniques.  Fearful that the new buildings could collapse at any time, locals took to walking in the middle of the road, rather than along the sidewalks.  Almost one hundred years later this weird local quirk is still noticeable from the minute your marshrutka (minibus) turns onto Stalin Avenue.  If you’ve arrived in your own vehicle make sure to pay close attention to pedestrians who may cross the road in front of your car at any moment.

Of course, Gori is also the birthplace of Joseph Stalin (born Ioseb Jughashvili).  Today, Stalin tourism is the main draw for foreign visitors stopping by on one of the many Tbilisi day tours that visit this city each day.  Walk or drive north along Stalin Avenue to Stalin Square, then cross the road to find the house where Stalin spent the first four years of his life, which is now preserved as part of the Stalin Museum.  Although most of this museum is signed exclusively in Georgian and Russian, occasional English-language tours are offered by guides who still think of the Soviet dictator very fondly.

As you drive from Tbilisi to Gori, take note of your proximity to the disputed border with South Ossetia.  At one point, about ten kilometers east of Gori, the border comes within five hundred meters of the roadway.  One wrong turn and you could find yourself in occupied territory, and one minor act of aggression from the Russian troops and Georgia could find itself without a unified east-west highway.

A Day Trip from Tbilisi to Uplistsikhe

You’d be crazy to do take a day trip from Tbilisi to Gori without also doing a side trip to Uplistsikhe (“Lord’s Fortress”), a town that was carved out of stone as far back as 1,000 BC, and inhabited until a final invasion by Mongols in the 1300s.  The entire community is well-signed in English, allowing you to understand the range of stone-carved buildings (including fortifications, wells, temples, gates, a wine cellar and a grand basilica at its upper summit). Your ticket to Uplistsikhe includes entrance to the museum at gates; inside there is a collection of artifacts found at the site (and air-conditioning!). The heat hits hard here, so pack lots of bottled water, sunscreen and a hat.

Uplistsikhe is about ten kilometers from Gori. Taxi drivers will make return the trip for about $10 (including an hour or two of waiting time) or you can hop on one of the hourly marshrutkas that head to modern Uplistsikhe town and walk the last kilometer across the river.

A Day Trip from Tbilisi to Stepantsminda and Gergeti Trinity Church 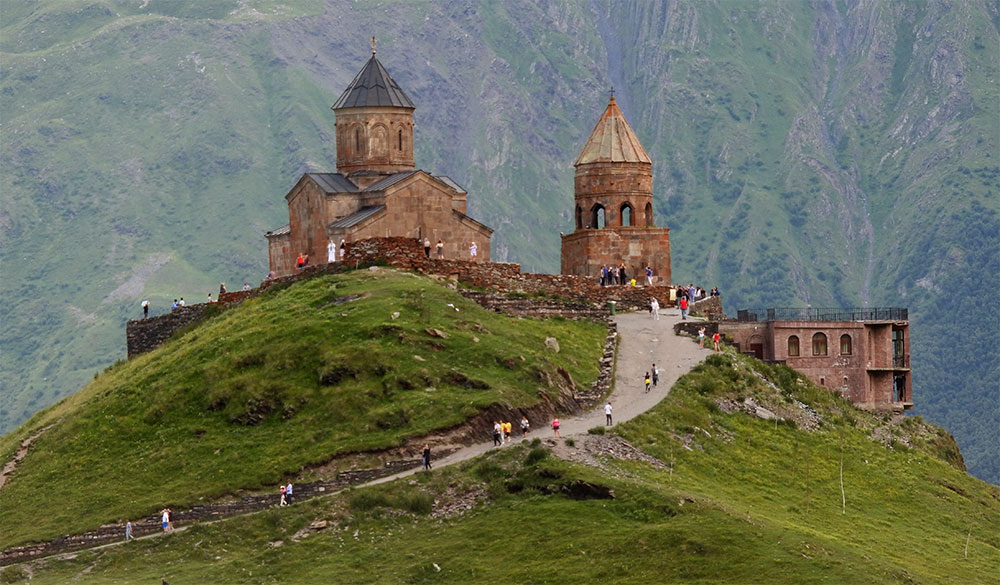 When you’re down in the village of Stepantsminda in north-eastern Georgia, you can just barely see the silhouette of the Gergeti Trinity Church in the mountains off in the distance.  From the village, it’s impossible to imagine the sight that will await you at the top of your three-hour hike up to the church… a sprawling, luscious green field, grazing cattle and the iconic fourteenth-century church just a short (and finally flat) stroll away.

The Gergeti Trinity Church is far enough away that it is the longest of the Tbilisi day trips on this list, and to make it there and back in one day (by driving on the Georgian Military Highway!) you will need private transportation.  You could rent a car, hire a car and driver, or do what I did and join an organized day tour through Envoy Hostel (which is also where I stayed – twice!).

The advantage of the organized day tour from Tbilisi is, of course, having a knowledgeable guide who can help you choose the best of the three trails to the church depending on your hiking style.  There is a short trail that is very steep and rocky, a longer trail with more flat sections that intersects the busy road again and again, or an even longer trail that adds an hour to your travel time but makes the ascent much more gradually.  My group opted for the steep trail.  I would describe it as a challenging but short hike – I was recovering from a cold and could not breathe through my nose, but was still able to keep up to my group (even with my occasional breathing stops). 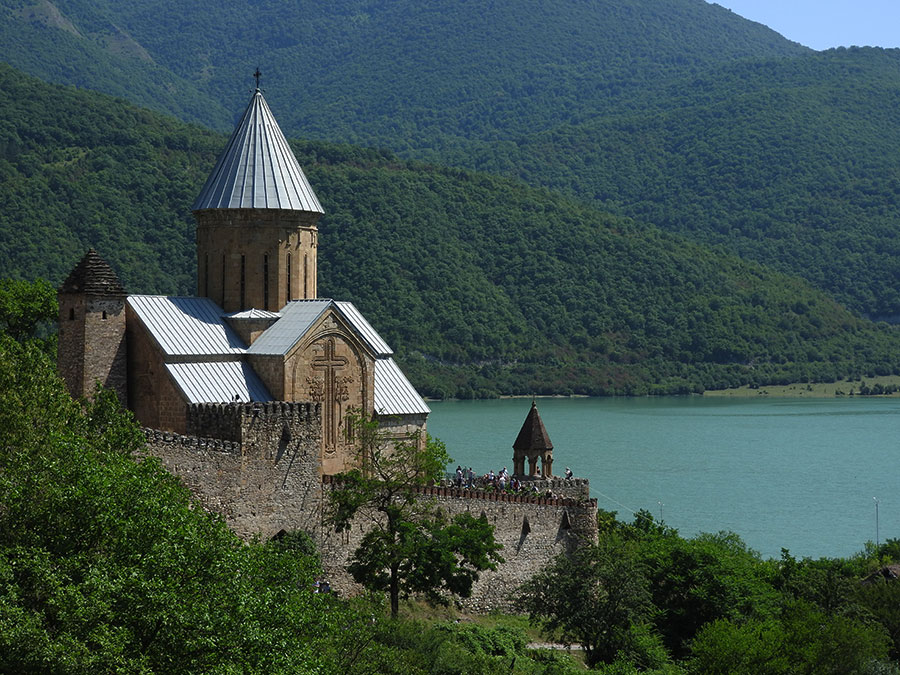 Perhaps Georgia’s most fairy tale-inspired attraction, the Ananuri Fortress Complex is perched high above the Aragvi River, fifty miles north of Tbilisi.  Inside the strong walls visitors will find a small castle, bell tower and three churches, dating back to the sixteenth century (the site has been occupied since the thirteenth century but was frequently destroyed during local skirmishes). There are fantastic photo opportunities all around the fortifications, but you’ll get the best photos by backtracking along the road to the bridge and snapping your shots from there.

Most Tbilisi day trips to Gergeti Trinity Church will stop for an hour at Ananuri, but it’s also possible to visit on your own.  You can hire a taxi from Tbilisi or Mtskheta, or you can try hopping on a marshrutka from Tbilisi to Kazbegi and getting off at Ananuri (however, your driver might ask to you to pay the full fare and you’ll have to flag down another bus at the side of the road to get home).  If you’re using private transportation on your day trip, ask your driver to stop at the Zhinvali Dam for another spectacular photo opp.

If you’d rather stay in the city, check out my Tbilisi City Guide, featuring the best attractions, restaurants and hotels in Georgia’s capital city.

For an overnight tour from Tbilisi, consider visiting Chiatura, home to an aging network of Soviet cable cars.